Update re the birdlife at the northern end of Greenland Dock 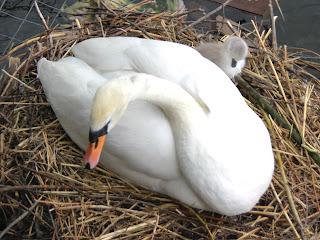 I went up today, in what felt like a howling gale, to check on the coots in Norway Cut and the swans in Greenland Dock.

The coots were looking distinctly wind-swept, with waves pushing the nest around within the confines of the pontoon.  Wind had swept much of the plastic rubbish off the nest, but it was looking very waterlogged.

The swans were far more protected from the wind at the end of the dock, and there was very little turbulence at their level.  There is still only one cygnet, but although the female swan is still sitting on the nest, with the male in attendance, it seems very unlikely that any of the others will hatch now.  The single cygnet continues to look very well and was moving around the nest a lot. 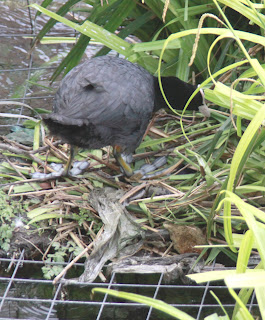 Next to the swans' nest a coot is setting up home on the neighbouring pontoon.  Until the coot chicks hatch there probably won't be too many problems but coots and moorhens are notoriously vicious in protection of their young, and hopefully the swans will have moved on by the type the coot eggs hatch in just under a month after being laid. In fact, in demonstration of this, a moorhen climbed onto the same pontoon as the coot and all hell broke loose for a minute or so, with the coot attacking the moorhen, which hopped onto the swans' pontoon only to be attacked in turn by the female swan.

The water beneath the pontoons was full of huge fish. I overheard someone saying that they were bream.

I then walked to the delightful Surrey Docks Farm, mainly to inspect the pigs, which I love, before walking back along the Thames Path, and cutting over the Salter Road foot bridge to return through Russia Dock Woodland along Waterman's Walk.  The Yellow Flag iris is infesting every channel and looks very beautiful, although it is considered as something of a weed by many parkland managers as it has a habit of colonising open water like a particularly virulent weed.  The main green, which was looking distinctly shaggy a week ago, is looking beautifully manicured today, and the whole area is looking very well maintained. 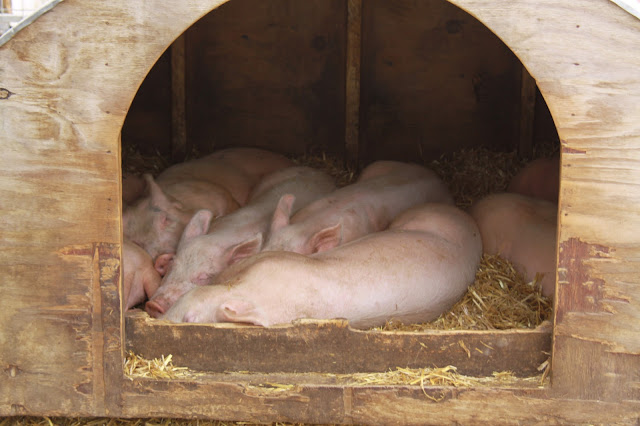 Have been following news of the swans and ducks. Last time I looked in Canada Water the swans had a nest with several eggs, then, a few days later, they were gone, but I haven't seen any cygnets about.

I do hope that the eggs hatched and that the Canada Water swans now have a family. Only one of the Greenland Dock ones hatched - I heard today that the swans took their one cygnet and abandoned the three remaining eggs on the nest.