A walk through what remains of the Grand Surrey Canal


This post describes a walk from the entrance lock on the west of Rotherhithe, by the Old Salt Quay pub (formerly Spice Island, the name by which it is still often know locally), to the Moby Dock at Greenland Dock on the opposite side of the peninsula, where the beach at the water-sports centre marks the course it once took out of Rotherhithe.

Between these two landmarks the remains of the Grand Surrey Canal can be traced on a walk that takes approximately 30-40 minutes from end to end, depending on how quickly you walk and whether you take time to go up Stave Hill to see the 1896 dock sculpture and see the panoramic view.  It's a pretty route, taking you past Surrey Water and into the Russia Dock Woodland, and it has the possible benefit of leading you from one watering house to another.


Work on the Grand Surrey Canal began in 1807, after the Grand Surrey Canal Act had been passed in 1801. It ran from the west side of Rotherhithe and reached Camberwell's Addington Square in 1811 and Peckham's Canal Head in 1826. It was so-named because in the early 1800s Rotherhithe was still a part of the county of Surrey. The canal crossed the entire span of Rotherhithe.  For more details about the history of the Grand Surrey Canal see one of my other posts about the development and demise of the canal.  It would have been impossible for me to match up the modern landscape with the reality of what was where in the 1800s without all of Stuart Rankin's work, captured so splendidly in his 2004 Maritime Rotherhithe - History Walks (details in Bibliography), although any mistakes are obviously mine.

Much of the route to the Grand Surrey Canal beyond Rotherhithe is completely built up, although small segments can be found in the form of parks and stretches of road and rail, so it is nice to be able to trace the first part of it so clearly through Rotherhithe.

.
The walk starts at the Old Salt Quay.  With the pub to your left, walk towards the big red bascule bridge but before walking onto it turn right down onto the Thames Path, which takes you in front of the pub along the side of the Thames.  Walk for a minute or so, skirting a modern building, and you will reach sizeable inlet. This is the first lock entrance to the Grand Surrey Canal.


In the years that followed the 1801 Act, a basin and a small entrance lock for barges were constructed, and although it was still connected to Stave Dock on the 1868 map, it was completely blocked off from its original basin by 1894 and the inlet was put to other use, but this is where the Grand Surrey Canal first connected to the Thames. 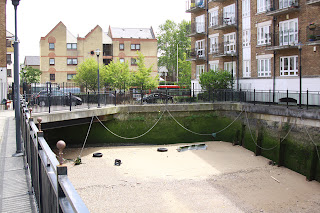 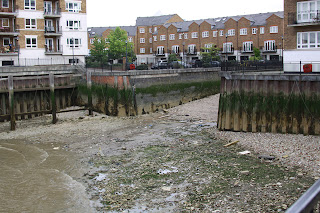 Today, immediately behind it, are new developments built in the 1980s and 90s.


In the late 1840s it was decided to add another, bigger basin, for which a new and lock would be required to provide access for barges, and both the lock and the basin survive.  Many of the old docks and basins were filled in when the Surrey Commercial Docks closed in 1969, but some were restored when it was decided to develop Rotherhithe.  As the main building work was to be residential, it was decided to add water features and green areas, and the former docks were ideal for both.

So now retrace your steps.  As you approach the bascule bridge you will see the dolphin straight ahead and the inlet into the lock that passes under the bridge.  The dolphin, one of the few survivors of many that lined the Thames, helped barges to manoeuvre into the lock entrance that replaced the first one.


Next, following the course of a barge that might have used the Grand Surrey Canal, cross the road, staying this side of the bascule bridge.  You will find yourself at the lock.  At the lock entrance the two solid gates are still in tact.  They were once hydraulically-operated, with a walkway passing over them.

Beyond the lock the new strangely shaped Surrey Basin (renamed Surrey Water by developers),  linked to Albion Dock on one side and Island Dock on the other.  You can see this on the map below. The Grand Surrey Canal passed from Surrey Basin into Island Dock.  Walk to the basin and pause to enjoy the view.  It now provides a home for water birds of both freshwater and marine types. As well as swans, coots, moorhens and a variety of ducks there are often seagulls and shags.

The Grand Surrey Canal passed out of the Surrey Basin at the left of your current position.  You can see a small inlet, and this is where the canal left the Basin and passed into Island Dock.


During the mid 1800s, whilst the canal was still operating, much of the canal was widened to form areas along either side of the main channel that could be used for mooring and offloading.  Crossing Rotherhithe, the Grand Surrey Canal was enlarged so that it passed through no less than four of these docks: Island Dock (marked by the inlet just mentioned), Stave Dock, Russia Dock and Greenland Dock.  We will now head in their direction.  This is probably easiest to visualize on 1868 map of Rotherhithe (click the picture to enlarge it): 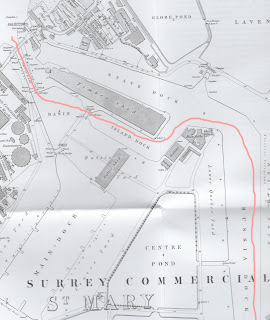 So walk to your left, skirting Surrey Water, passing various dock-side features on the way, heading for the Grand Surrey Canal inlet and the road to its left.  Walk up the road and cross onto the pedestrian walkway Dock Avenue, through the ornamental wooden shelter, towards the artificial mound ahead, called Stave Hill.  You are now following the line of the Grand Surrey Canal.


Once you reach Stave Hill, it's worth pausing for a break by climbing the shallow steps to the top of the mound.  Here you will find not only great views, but a Michael Rizzello brass relief map of the docks in 1896.  It is a tremendous piece of sculpture and gives you a view like no other of how the docks interlinked with ponds and basins at that time.  You will be able to trace your path so far. Pay close attention to the east side of the sculpture, where you will be going next.  Greenland Dock was half its current size in 1896, and the lock passed across its end.  When the dock was later enlarged, the canal passed straight across its centre, which will will see shortly.

Resuming our walk, go half way round Stave Hill, as though you had walked a straight line across it or through the middle of it, and head through the little entrance with the red and black portals on either side into Russia Dock Woodland.


Follow the path to a T-junction. Turn right and right again and then turn left onto a line of granite quay edgings that stretch in a straight line into the distance.  You are now following the line of the Canal into Russia Dock. The lovely granite edging was once the quay side, and the area of green parkland is where the dock was filled in and converted to parkland.  The walkway that follows the quayside is now called Watermans Walk and leads to Greenland Dock. 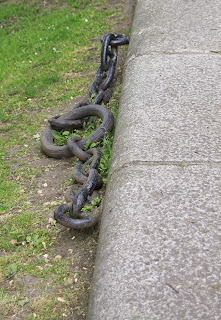 Head to the right down the full length of the walkway towards Greenland Dock, following the line of the Canal, until you are nearly at Salter Road.  Along the way you will see various features from the dock's past, including crane rails, bollards and chains.


When you have a choice of going up to the road or turning right to go under the road, go right.  This path takes you into the original lock that connected Russia Dock with Greenland Dock, which now forms a useful underpass. 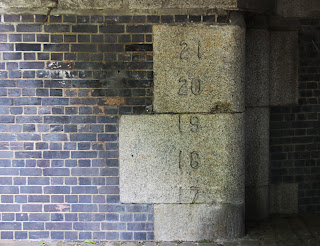 When the Grand Surrey Canal was built the canal actually passed to the south of Greenland Dock, as shown in the 1868 map and on the 1896 Michael Rizzello Sculpture at the top of Stave Hill.  However, when Greenland Dock was expanded, it was necessary for barges on the canal to cross the middle of the dock.

Actually standing in the lock gives you the chance to see features that you miss when looking down into water-filled equivalents, including the measurements on the right hand side.

The road used above used to be a swing bridge for which the hydraulic gear survives on the other side of the lock, up to the right.


When you emerge from the lock, still following the path of the Canal, you will find yourself with the Moby Dick to your left, looking out over the width of Greenland Dock to the water-sports centre immediately opposite.  The small beach to the side of the centre (in the middle of the photograph below) marks the line that the canal took across the dock after it had been extended.  The canal proceeded from here without any further width expansions, on its way out of the network of docks and basins towards Peckham and Camberwell. 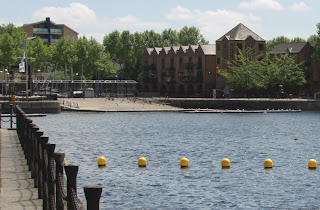 The walk ends here, at the opposite side of Rotherhithe from where we started, from lock to lock, but as you can see from the 1843 map above, it passed under Plough Way and just short of the Deptford Royal Docklands took a right angled shift to the west.  A fairly long stretch of the old canal is now Surrey Canal Road.

At the recent Deptford Update exhibition there was a feasibility study looking at what could be done to mark the route of the old canal either by footpaths, landscaping etc. I didn't note down the details but if you are interested I'm sure Lewisham Council will be able to supply the information, it's in the public domain.

Terrific! Thank you very much. I'll look into it and let you know if I find something useful.

The Grand Surrey Canal was ran by Isaac J Hilldrup in 1864 in Trafalgar Place. He was a Publican there at that time and is my Great Grandad x3. It is listed in Census as Camberwell, Surrey.

What happened to the Grand Surrey Canal pub? Whereabouts would it have been situated?