When I first moved into the area there was a rather nice lock-keepers house near to the Moby Dick pub, which served the Grand Surrey Canal Lock that connected Greenland and Russia Docks (now preserved as a pedestrian underpass).  The house was allowed to deteriorate, became a disgrace, was knocked down and replaced with an undistinguished block called "Lock-keepers Heights."  Sadly, and stupidly, I never got around to taking a photograph of it.  It was one of the few remaining buildings associated directly with the former docks to survive the redevelopment in the 1980s, presumably because many of them had already been demolished as the docks expanded, destroyed during the bombings of the Second War or because many of the warehouses and associated buildings had little architectural merit.


So it is good that at the top of Greenland Dock and behind the water-sports centre there are three buildings, clearly built at broadly the same time, that preserve some of the late nineteenth / early twentieth century buildings.  They were built when the dock and the lock were extended between 1894-1904.

All three of them were probably designed by James McConnochie (who is also thought to have been responsible for the dock offices on Surrey Quays Road) for the Surrey Commercial Dock company.  They are single-storey structures built in a pale yellowish brick (the yard office was of a paler, whiter brick), with a black brick plinth visible along the bases. The doors and windows set under red-brick jack arches with white keystones, and each building was topped with a black-tiled hipped roof (again, the exception is the Yard Office, which has a gabled roof).  Chimneys were provided for much-needed heat. They are lovely little buildings, nicely designed and were clearly intended to be good looking as well as functional.

The lock keeper's office at Greenland Dock lock, headed by the Lock Keeper, was the equivalent of the modern edifice overlooking South Dock's lock entrance.  It was manned in thee shifts by teams whose role was to process ships in and out of the lock when the tide was right.  A lock keeper's office would have sat at every lock into the network of docks in Rotherhithe, and paintings of the office at the entrance to Surrey Basin survive.

The gauge house, next to the lock keeper's office, contained the equipment for determining the state of the tide.  It was essential for the correct operation of the lock for this to be precise.  The equipment consisted of a tide gauge that indicated the level of the river. 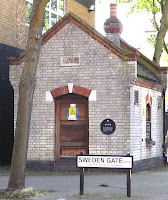 The yard office is a tiny building, little more than a stone-built shed, on the corner of Sweden Gate and Rope Street, behind the water-sports centre. It has a plaque above the entrance saying that it was erected in 1902, which is probably a few years later than the other two buildings.  As noted above, there are some minor differences from the lock office and the gauge office, most notably the colour of the brickwork and the gabled roof.  It also has a particularly elaborate chimney for the size of the edifice. It is set back from the dock, and although the plaque on the wall says that its function was unknown, Stuart Rankin's Transport, Industry and the Docks walk says that it was the Grand Surrey Canal office for collecting tolls from canal traffic. The canal, instead of passing to the south of the dock, as it had before the extension of the dock, now extended across the middle of it (you can see the line that the canal took across the dock, from the inlet in front of the Moby Dick pub to the beach at the side of the water-sports centre). 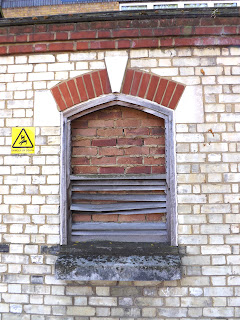 Two of the survivors, the lock keeper's office and the gauge house at the eastern side of Greenland Dock's lock entrance, appear to be in fairly good condition, and the lock office is still accessible by council workers.  The yard office behind the water-sports centre does not present quite such a positive appearance, with its door and window blocked in a considerably unsympathetic way.

Both the Lock Keeper's Office and the Gauge Office are Grade 2 listed, but I cannot find any listing for the Yard Office, which could account for its neglect. Whatever the reason, it really needs to be restored so that it doesn't look like such a mess.  Even when buildings are structurally sound, the moment they begin to look ruinous people cease to treat them with respect, they become the objects of vandalism, and the next thing you know, just as with the Surrey Grand Canal Lock Keeper's house, they are removed and replaced. This should not be allowed to happen.  I've emailed Southwark Council about the condition of the building and will post an update when/if they reply.