I have an eternal fascination with ships, and have written about several on this blog.  After Rotherhithe's hey-day of building wooden sailing ships, the industry started to change and instead of building ships, some of the great shipwrighting names in the area turned to breaking rather than building.

Recently, the aircraft carrier HMS Illustrious visited Greenwich and although I didn't get the chance to go on board, it was fabulous to see her massive hull soaring out of the water from the level of the Thames Clipper.  HMS Illustrious is about to share the same fate of 100s of British warships that have ceased to be considered to be suitable for service.  She is about to be broken up for scrap. A sad thing.

The most famous ship to be broken up locally was the HMS Temeraire, immortalized in J.M.W. Turner's glorious painting The Fighting Temeraire, in which he depicted the magnificent ship being towed down the Thames to be broken up.  I've posted about that in an earlier post, which is accompanied by a rather tragic photograph of her pitiful condition in her last days.  In the mid to late 19th Century the breaking of ships was a lucrative business.  The Admiralty sold unwanted warships to private companies who broke up the ships and sold off the parts.  Metal fittings and wood were the most valuable parts, but even the rope was sold off.


A similar illustration was published in 1871 of the breaking that year of the marvellous HMS Queen.

HMS Queen, named for the newly crowned Queen Victoria, was built in Portsmouth and was launched on 15th May 1839. Victoria visited her in 1842.  She was a triple decked 110 gun First Rate ship of the line, similar to the Temerarire.  She is something of a landmark in the history of battleships, as she was the last to be built with sail power alone.  Steam saw the end of the sail-powered battleship, and after serving in the Crimean War, the HMS Queen was herself converted to screw-steam power in 1859, and was reduced to two decks and 86 guns. There's a photograph of her at the Royal Navy Museum in Portsmouth showing her with all three masts, yards, her bowsprit and only two decks, with a steam funnel sitting just behind the foremast - it is a most peculiar vision.

HMS Queen was brought to Rotherhithe to be broken up in in Surrey Canal Wharf, formerly one of the Beatson yards, by William Beech and Henry Castle.  She was the last large warship to be broken up in Rotherhithe.  She should have been worth a considerable amount of money once broken up, but on her arrival at the yard she was stranded on the foreshore by the ebbing tide and her back snapped, splitting her in two, meaning that the long lengths so desirable to purchasers were halved and much of her value was lost.

She was the last wooden warship broken this far up the Thames. The Illustrated London News covered the story on September 9th 1871, with the illustration shown on this page. 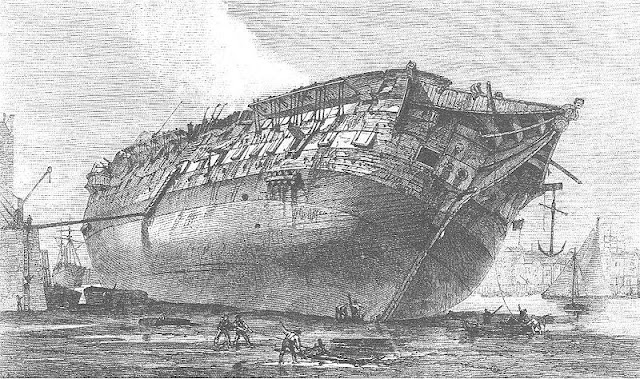