There are four bridges of historical interest around the edges of Greenland Dock, only one of which is in its original position.  When the London Dockland Development Council decided to retain Greenland Dock, rather than filling it in, as had been done for most of the other docks, it was an obvious place to gather some of the original bridges.  The lattice bridge across the lock into Greenland Dock is in its original place; the others were brought in from other nearby areas to preserve them in an authentic environment.  They are all remarkably different from each other, and each is delightful.  A circuit of the dock makes a good short walk, and the bridges provide some really good landmarks and the views from  the lattice bridge are particularly good.

The lattice bridge (Stuart Rankin's name for it, which suits it well, given its similarity to lattice-truss construction bridges) was manufactured by Armstrong, Whitworth and Co. from bolted cast iron and has a walking surface of wooden planks.

It was constructed here in 1904 when the lock was extended to handle larger ships. It still crosses the lock of Greenland Dock, where it was originally located. Although the lock gates, the granite steps and the hydraulic gear have been preserved, the lock is now blocked off and vessels now enter and depart Greenland Dock via Steel Yard Cut, the linking channel between Greenland Dock and South Dock.  The bridge was renovated in 1987 and still looks good. It is Grade II listed.

A magnificent structure, the bridge is one of the best features of Greenland Dock.  It was not fixed in its position. Its two parts could be swung to each side when tall ships needed to pass through the lock.  It was operated by vast hydraulic jiggers, which are still preserved today, although it no longer functions.  The swing bridge was opened and closed by high pressure water through pistons in the cylinder equipment.  They are still in position in the pits next to the bridge on each side. 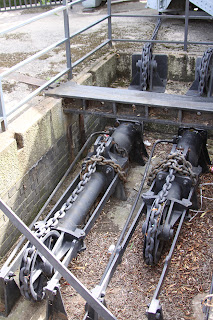 Moving clockwise around the dock, the next bridge of interest is another footbridge, Henry Grissell's 1862 swing bridge.  It now stands permanently open on either side of the above-mentioned Steel Yard Cut.

Known as "Iron Henry" Grissell (1817-1883) started his working life as an apprentice to the Bramah iron casting and metal working company, before establishing his own business in the early 1840s.  The company, which Henry Grissell established with his brother Martin at the Regent's Canal Ironworks, built bridges for clients all over the world, and made the the gates and railings at Buckingham Palace and the British Museum.

Here's what Southwark's Planning Department has to say about the bridge: 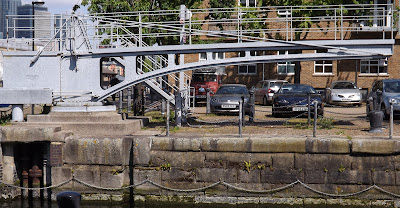 Whatever sort of bridge was used to cross the Grand Surrey Canal is long gone, and the next bridge required to cross one of the connections between docks was that between Greenland Dock and Canada Dock (now Canada Water).  Today the old passageway between the two docks is a pedestrian underpass leading to Tesco with Salter Road passing over the top of it.  Parallel to the road, also bridging the underpass, is one of Rotherhithe's two remaining bascule bridges.

The bascule bridge at the end of Greenland Dock was originally at Deptford Creek (this photograph on the City of London Collage website appears to show it in action at its old location) and was moved here in 1959 to replace the wooden bridge that was here previously.  Its twin is still in situ in its original location at the Thames entrance to Surrey Water (next to the Old Salt Quay public house).

You have to love something that's called a "Scherzer rolling bascule lift bridge" even if you don't know what on Earth it means.  And it is a magnificent beast.   "Scherzer" refers to William Scherzer who pioneered a particular design of bascule bridges in the US.  The term "bascule" refers to bridges that open and close with a system of counterweights that balance the bridge continuously as the bridge rises and falls.  The whole bridge used to swing upwards on its rocker.  There's a lovely advert from 1913 on the Historic Bridges site showing how it operated: http://www.historicbridges.org/illinois/mcdonough/ad_large.jpg. Tower Bridge is a bascule bridge, but not of the Scherzer variety.

Heading back around the dock towards the Thames once more, and passing the old inlet to Russia Dock and the Grand Surrey Canal, the final bridge on the circuit is the Norway Cut Swing Bridge.

It was designed by dock engineer James Walker in 1855 and was built by Walker, Burges & Cooper.  Its first home was at the lock entrance to South Dock. It was moved to the Norway Cut in 1987 and it, like the the other bridges around Greenland Dock, no longer moves.  It is set into two of its original granite plinths either side of the blocked off access channel (or "cut" or "cutting") to the former Norway Dock (now a development known as The Lakes).  Of you click to see the larger image, you can clearly see the gap int he middle of the bridge where the two halves meet.  It was manually powered, unlike many of the later bridges of the period, which were powered by hydraulics.  There is a round plaque providing a few details about the bridge.

The bridge is now Grade II listed (English Heritage ID 471365).  Details of the listing are available at:  http://www.britishlistedbuildings.co.uk/en-471365-swing-bridge-over-cutting-between-greenl, which describes it as follows:

Wrought-iron plates and angles. Based on cast-iron precedents but owes its elegant lightness to use of wrought-iron with countersunk rivet heads, an early surviving example of riveted ironwork in bridges. Some welded steelwork discretely added in refurbishment. Original granite kerbs and paving reinstated at the new site.


The English Heritage description also says that it is the second oldest bridge in Docklands, but somewhat frustratingly doesn't say which the oldest is!

A sculpture of James Walker is located near to the Moby Dick.


As usual, my thanks to Stuart Rankin's excellent work for much of the information in this post (see the bibliography page).  The photographs are mine.

Great article thanks, I love those bridges and was particularly interested to hear about the one that was relocated from Deptford Creek.

Good to hear from you - I am very glad that you liked it. The difference between all the bridges makes them particularly interesting on a walk around the dock. There's another red bascule bridge over the other side of Rotherhithe, not far from the Rotherhithe Tunnel, but the others are all unique in Rotherhithe and I don't know of any comparable ones in the surrounding area.

WOW! That is amazing. Of course, they will trust a company with a leading name in structural steel for his project.