Update on the Greenland Dock swans and coots 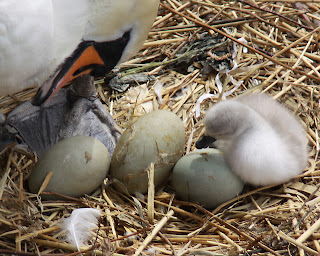 At the northern end of the dock the cygnet, which hatched on Sunday, is continuing to do very well.  It is still very active, and yesterday mother and chick were busily rearranging the nest around the four remaining eggs, pausing often for urgent feather-grooming sessions.

Although the recently hatched cygnet does offer hope for some of the other eggs, that hope is disappearing fast.  Some of the eggs were laid six weeks ago, the others four weeks ago.  It usually only takes around three weeks to incubate them, so it is becoming increasingly unlikely that the remaining eggs will hatch.  Still, we all keep checking in on them hopefully. 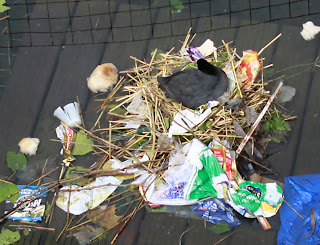 As for the coots in Norway Cut, their nest is only a few days old and they usually take around 21-25 days to incubate so there's still a long time to go before we find out whether a new family will emerge from that nest.

The nest, which looked so smart a few days ago with its new reeds, is now adorned with a range of crisp packets, supermarket bags and other gaudy accessories. It looks more like a ghetto, than a nest! The whole edifice is quite clearly floating, and has shifted to the centre of the submerged pontoon, but seems to be quite safe for now.

I was intending to go down to the southern end of the dock today to see what is happening there on the pontoons but I never quite got around to it.  A busy day.  I'll zip down tomorrow instead. 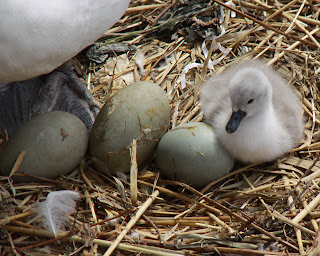