Plight of nesting swans and coots at Greenland Dock 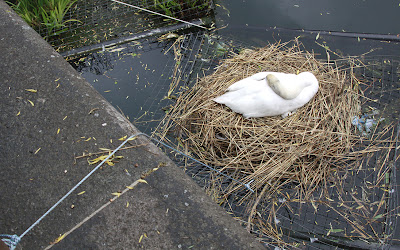 My thanks to Steve Cornish, the Chair of the Friends of Russia Dock Woodland for bringing to general attention the plight of the nesting swans at Greenland Dock.

In a letter to Southwark Council copied to a number of interested local parties, Steve made a powerful complaint about the Council's failure to maintain nesting pontoons and provide nesting material, which has caused various problems including pontoons coming loose, coots nesting with crisp packets and carrier bags and the resident swans at Greenland Dock nesting on a sinking pontoon.

A few days ago the female swan and her five eggs were only just above water level, and every time the cob (male swan) joined the pen (female swan) on the pontoon it sunk even lower .  Members of the public, who spotted the situation, have managed to rig together pieces of rope with home-made grappling hooks to fasten the slowly sinking pontoons to the side of the dock in an attempt to prevent her eggs from perishing. You can see the ropes attaching the pontoon to secure dockside fixtures on the photograph above. The same local residents have also provided much more nesting material so that the nest has now been raised above the water level. Whether this has been enough to save the eggs will become clear in the next week or so. 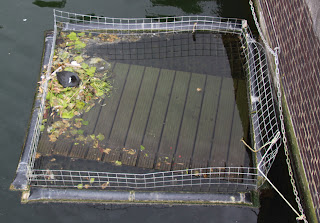 In the Greenland Dock side of Norway Cut (the bit still connected to Greenland Dock), a pair of coots are attempting to nest on a submerged pontoon.  Their only nesting material so far consists of a feeble number of fallen leaves, a bit of blue rope and some rubbish.  The whole thing is below the water surface and does not hold much hope for a successful hatching.

This is so disappointing. Southwark Council desperately needs to ensure that the budget and the personnel are available to resolve this situation, if not now when it is nearly too late, then on an ongoing basis in the future.  This should be routine, scheduled work.  Consistent with their rejected proposal to turn the highly regarded open space of Greenland Dock into a marina last year, it is sad that Southwark Council continues to demonstrate disregard for the needs of the dock's resident wildlife. 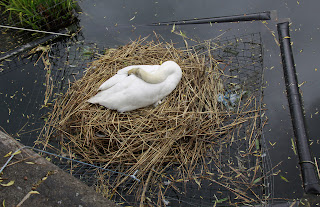 It is such a shame..I keep a close eye on all of the birds and I'm so pleased there are other people trying to help. Brilliant effort with the Swans nest!

I love your blog- as a fellow Greenland Dock blogger please check mine out (bit sparse at the moment)
www.greenland-dock.com

Hi. I've just had a look at your site and have added to my list of links. I'm surprised that I hadn't found it before. Great to be in touch. Andie.

You will be pleased to know that one of the eggs hatched today - very cute cygnet wobbling around :)