Coot chicks in the sealed part of Norway Cut


I am anything but sentimental about coots.  They are both noisy and aggressive, and they regularly wake me up at a ridiculously early hour with their bickering, but their tiny and ugly chicks, with their bright foliage and funny little peeping voices are somehow endearing. They resemble miniature turkeys rather than the water birds that they grow up to be.  Norway Cut has been divided into two sections. One part is still connected to Greenland Dock, but in the old connecting passage between the two docks there is now a piece of water that is isolated from both Greenland Dock and Norway Dock.  This part of Norway Cut, which is completely sealed at both ends, will be the home for the parents and their chicks until the chicks are large enough to fly out.  Since last year someone has put a floating blue duckhouse in the water, which is also rather endearing.  Here are some pics.

There were swans with cygnets on Norway Dock itself, but the new camera wasn't up to dealing with the contrast of dark water and bright white swans without manual intervention (and I haven't figured that part out just yet). 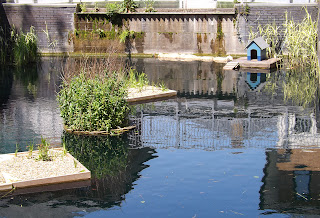 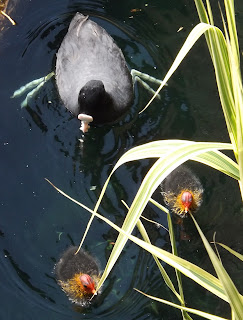 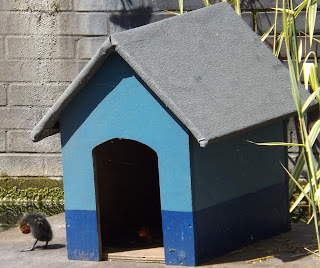 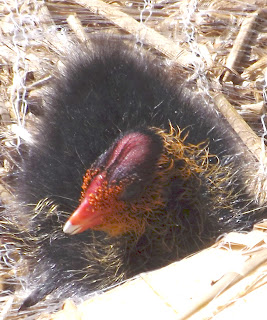