A late Nineteenth Century pub - The Ship and Whale 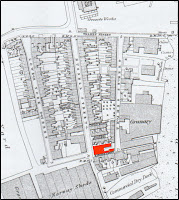 It is often very difficult to work out where various buildings and roads on old maps were in relation to the modern layout, because so much has changed in the last 150 years.   Not only road layouts change, but road names are altered too.  Both the wartime bombings and the 1980s development of the area have wrought many changes on the landscape, which are very visible when comparing maps from different periods.

On the 1868 Ordnance Survey map (sheet 68) there were no references to Elgar or Odessa Streets, which were then Thames and Lower York Streets, with a Russell Street running between them and parallel to them. The change of road names took place sometime before the 1914 map was issued.  On the 1868  map, copied on the left, the location of the Ship and Whale is picked out in red. 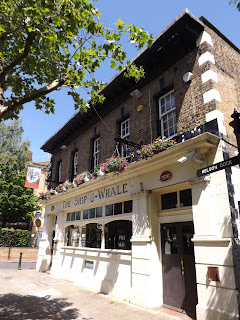 A Ship and Whale public house is first recorded in 1767 and was named for the whaling industry that was the main purpose of Greenland Dock at this time.  However, the current building is not the eighteenth century original. It is not known what happened to the previous building and why it had to be replaced.

A public house is marked on the 1868 map as P.H. on Russell Street (and is now on Gulliver Street). The style is certainly consistent with a late nineteenth century date. The first floor has evenly spaced sash windows, typical for the day, with white blocking at the brick-built corners.  With a door at each end of the building's ground floor facade, the decorative window area is uninterrupted, and provides an attractive symmetry to its overall appearance.  It's a really fine piece of late nineteenth century vernacular architecture, completely consistent with other Rotherhithe buildings of the era, and it's a shame that so little is known about its past.

It is one of a small number of buildings in the immediate area to survive the Second World War bombings in what was once a discrete residential and wharf area on the edge of Greenland Dock, of which there are very few remains. Odessa Wharf is another very fine building, sitting directly behind the Ship and Whale, dating to 1810, and now converted to apartments.  Randall's Rents, a small alley leading from behind the Ship and Whale, runs up along the side of Odessa Wharf and connects with the Thames Path. These survivors are surrounded by a series of very distinctive post-war developments, some more admirable than others.

The ship-building and grain storage focus of the area is clearly visible on the above map, where a saw mill is shown at the top of the page, the Commercial Dry Dock is shown at bottom right and a vast granary fronts onto the Thames (where New Caledonia Wharf is now located). There were also three more pubs in the immediate area: one at the other end of Russell Street (where the much later Orange Bull is now located), one on Thames Street and one on Lower York Street (the latter apparently where the Ship York is located). The Downtown area, a short walk to the north, supplied a church and a school (which survives as Trinity Halls), and at least one more public house.   The commercial focus of the area was shifting radically at this time.  The ship building industry in Rotherhithe was now in decline after 300 years, and the network of docks had expanded from the early 1800s to take up most of inland Rotherhithe.  The future was already on its way when the Ship and Whale was built: cargo handling and storage, mainly timber (in particular deal planks) and grain.


Today the Ship and Whale is owned by the Shepherd Neame brewery, and the bar area has been furnished very sympathetically with a variety of old mixed wooden tables and chairs and sofas.  There is an extended patio area at the rear of the building.  The upper floors are currently used for staff accommodation.  If you're planning to visit and look at the interior as well, you should note that it is closed during the day Monday to Friday (at the time of writing). 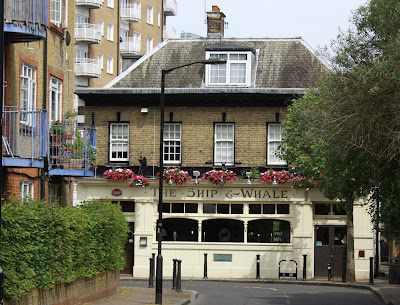 This is a great little pub, live very locally and like you I enjoy finding out the history of pubs and also where I live.

Thanks PJ. I've always liked the Ship and Whale - a great place to take visitors.