Success! A cygnet on Greenland Dock 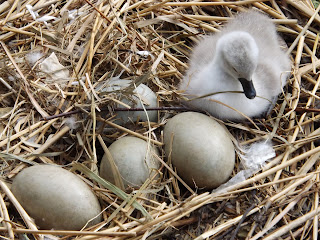 I posted a couple of reports last week about the plight of the swans and coots on Greenland Dock.  The problem was apparently caused by Southwark Council failing to renovate the pontoons in time for this year's breeding season.  It seemed distinctly possible that the five eggs of the swans nesting at the lock end of Greenland Dock would never hatch, because for the first few days after the eggs had been laid, the nest was partially submerged.

I was there yesterday evening, and there had been no change, but this afternoon on the way back from the Thames Clipper I stuck my head over the side of the dock and there, fabulously, was a chick.  When the female swan moved, we could see that four eggs are still waiting to be hatched.  It says much for public endeavour that at least one cygnet has been launched into the world and there is, of course, still hope for the others.

Here are a couple of photographs to celebrate.  I particularly like the one above, which shows the cygnet re-arranging bits of reed on its nest, which it was doing with considerable attitude.  It was very active and when its mother joined its father in the dock, the cygnet bounced to the end of the nest making a real din.  It seems to be doing very well indeed.  By the time I left there was a small crowd of mesmerized onlookers, many of whom had been keeping an eye on the nest over the last few days and were very pleased to see the new arrival.

Repeated thanks to everyone who pulled together to secure the pontoon and provide nesting material.

You can click on any of the photographs to see a larger version. 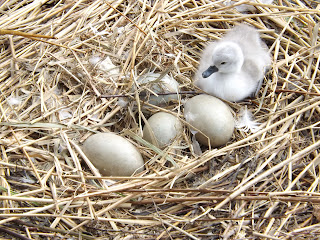 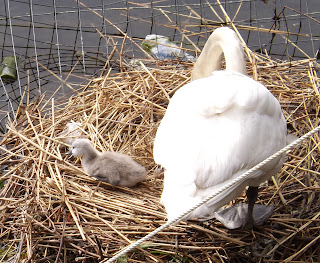 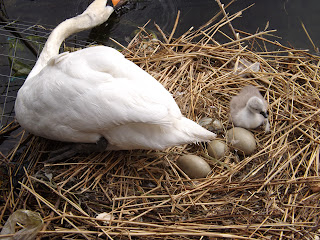 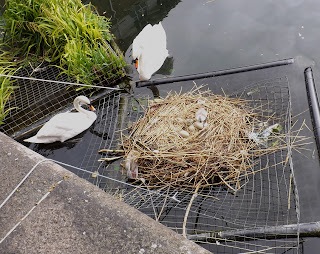 Excellent! Well done to the people who helped with the pontoon.
Hopefully the other eggs will also hatch.

I'm afraid that they didn't. As of today the swans have abandoned the nest with one egg missing and the other three unhatched. But at least there's one cygnet to be happy about!