Sunday in a skirt 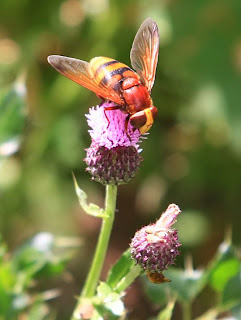 I was supposed to be going out to lunch yesterday, so I abandoned the usual shorts/jeans in favour of a voluminous ankle-length blue skirt. When lunch was cancelled due to logisitical difficulties I decided to go over the road, enjoy the sun and take some pictures. I should have changed my clothes but I didn't really think about it. I therefore found myself sailing forth into one of the wilder areas of Stave Hill Ecological Park in a skirt which was clearly designed to collect and gather, leave one's ankles vulnerable to stinging nettles, and make as much irritating noise as possible.

But the light was good and I managed to get some decent photographs. I saw a winged insect that looked something like a very large wasp, which I have never seen before (see photograph, left). I tried but failed to identify it from my books. My first instinct when it came straight towards me was to duck, because it really was quite large, but it kindly settled for a few moments on some thistles which enabled me to snap it.

A single dark pink water lily was in bloom in the pond behind Stave Hill (which was certainly not out last Tuesday when I photographed the same spot), and there were dozens of damselflies in electric blue, red, yellow and orange. Lovely. The usual mix of butterflies was present around Stave Hill. The grasshoppers were in great "voice", producing a sound which never ceases to entertain me. I also saw three foxes but they moved too quickly to be photographed.

It was nice to see someone else with the camera bug in Stave Hill taking photographs - although I daresay that the insane rustling of my skirt, which must have scared away the wildlife in a two mile radius, must have rendered me distinctly unpopular. Apart from that slightly guilty thought, it was a satisfying visit. I'll post some more photographs over the next few days from the last few days. I'm working back up in town during the week so I won't have the opportunity to visit again until Friday.

I dropped into my local, the Moby Dick, on the way back home for a quick beer next to Greenland Dock. Joe, the landlord, said that I looked "dapper" which made me laugh so much that I spilled a good slosh of my drink down the ill-fated skirt. Some people have style. Some people spill drinks down themselves. I sat outside and watched the little sailing boats and a wind surfer. For a few months now the inlet which was once the entrance to the old Russia Dock has been marked off with a row of yellow floats. This has been a puzzle, but I was told on Friday that they were put there because the undercurrents in the inlet are particularly bad and are therefore a risk to anyone who capsizes, particularly the children. 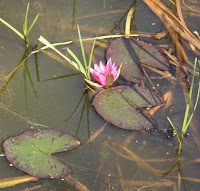 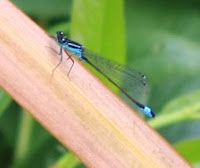 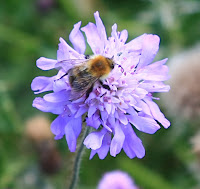 My insect book has a huge number of bee images - none of which look quite like this one.