I've only just got around to sorting out last Thursday's photographs, so they've arrived after Friday's, Saturday's and Sunday's but never mind. Nothing much changed in the space of a couple of days!

The colours were lovely - very moody, swinging between bright blue skies with pure white clouds and thunder. There is a profusion of red and orange hawthorn berries and rose-hips at the moment, which are very attractive, particularly against the blue skies. There are still blackberries, but I don't think that they will last for many more weeks. 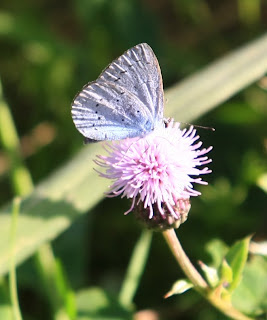 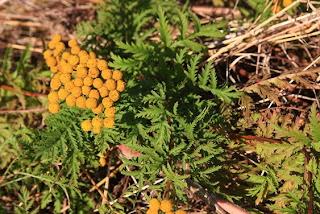 Contains a natural insecticide, and the leaves used to be thrown on floors to keep down flea populations. It was also used as a medicine for the treatment for threadworm. 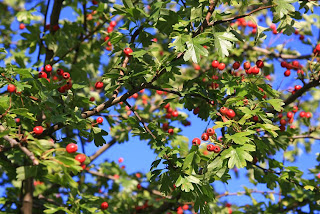 Hawthorn
(Crataegus)
There are many types of hawthorn - I have no idea which one this is. 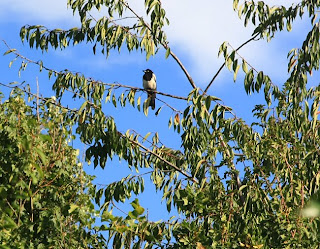 Members of the crow family, magpies have received bad press in the past. A single magpie, like the one above, was considered to be a bad omen. Magpies are monogomous and remain together for the duration of their lives (hence the saying "one for sorrow, two for joy). They were also persecuted in the belief that they were a pest to agriculture. This was an incorrect assumption. Although their numbers diminished dramatically in rural areas it is clear that their numbers have now recovered - mainly in suburban areas. They are notorious for a fondness for bright objects. They nest in tall trees and the female may lay up to eight eggs.