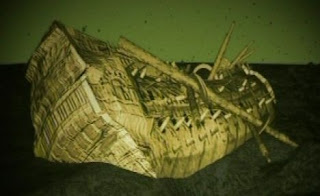 This is very much a "wow" moment - just look at HMS London on the Thames riverbed. She was actually built at Chatham, but if there had been any justice in the world she would have been built here at Rotherhithe :-)

The photograph comes from an article on the This Is London website. Here's an extract from the article, but see the above page for more, including a list of the boats which were found (quite an amazing list).

The largest-ever post-war salvage operation on the Thames has discovered seven shipwrecks up to 350 years old.

They include a warship that was blown up in 1665, a yacht converted to a Second World War gunboat, and a mystery wreck in which divers found a personalised gin bottle.

Oldest find: HMS London, which sank in 1665, at the bottom of the Thames Estuary

The salvage by Wessex Archaeology and the Port of London Authority, which regulates the river, was both historical and practical.

Jagged metal from the wrecks which stick out of the mud, silt, and gravel act as a 'can-opener' that can split apart vessels, especially large container ships which can skim within half a metre of the riverbed.

The operation was filmed for the BBC and took four months, using a dozen divers who used 3D survey equipment to locate the wrecks in near-zero visibility.
HMS Aisha: Originally purchased as a pleasure cruiser, it was crewed by civilians during the Second World War as part of 'Dad's Navy'

HMS Aisha: Originally purchased as a pleasure cruiser, it was crewed by civilians during the Second World War as part of the 'Dad's Navy' Home Guard

Frank Pope, the marine archaeologist who led the research, said: 'This is the first time it's been done on this scale on the Thames, clearing to such depths - down to 16 metres - to get at ships this big.'

See the link at the top of the page for the full story.