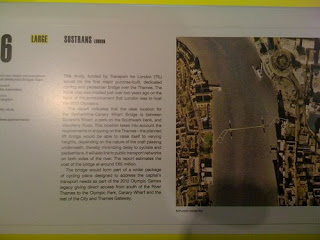 I just came across this photograph on "Dr Plockta's" Flickr stream (click on the image to the right to go to his website to see the full sized photograph). The reflection makes it quite tricky to read, but you can make it out quite easily if you use the zoom facility. It concerns a proposed pedestrian crossing between Rotherhithe and Canary Wharf:

This study, funded by Transport for London (TfL) would be the first major purpose-built dedicated cycling and pediestrian bridge over the Thames. The initial idea was mooted over two yeras ago on the back of the announcement that London was to host the 2012 Olympics.

The report indicates that the ideal location for the Rotherhithe-Canary Wharf Bridge is betweeen Durand's Wharf, a park on the Southwark bank, and Westferry Road.

Here's a map of where, on Rotherhithe, the bridge would terminate (taken from the feasibility report mentioned below): 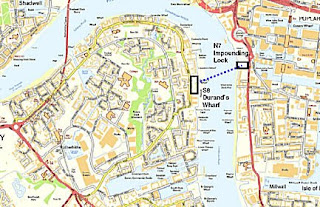 At first glance I though that this was the area occupied by the Surrey Docks Farm, but it is not. It is the small area of greenery just down from there, off Rotherhithe Street. Here's a somewhat clearer map on Streetmap.co.uk. There should be a red arrow marking the park, but is if not it is the green rectangle about half way between the Farm and Nelson Dock.

The poster goes on to say that it would be a lift bridge (self-regulating if I read it right, although I have no idea how that would work), that it would cost in the region of £65 million and that it is part of a wider range of cylcing plans which are being implemented as part of the 2012 Olympic infrastructure.

It looks as though Whitbybird have put forward the design proposal.

There's also a model mock-up of what the bridge would look like, also on Dr Plockta's site.

The complete technical feasibility study can be downloaded from the Sustrans website in PDF format. Sustrans is a sustainable transport charity. I haven't had a chance to read the entire thing yet.
Posted by Andie at 08:15

If anyone else is interested, those photos were taken at New London Architecture, on Store Street (off Tottenham Court Road), who have frequently changed exhibitions about London development projects (this one is called Spans and runs until 20 September).