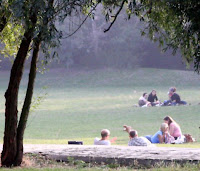 The last time I made it over to the park was last Sunday. I was running around like a headless chicken again yesterday, instead of living out my ideal-world scenario - lazing around in the sun for the entire day. I made it over to the park briefly at half past six. The sun was still out and there was a slight breeze, which meant that there was a distinct chill in the air.
There were still a lot of people, both on the green and dotted around the Woodland and the Stave Hill park. It was great to see so many couples and families who had clearly spent most of the day there, armed with rugs, frisbees, balls and picnics.

I was staggered to see how quickly and severely the water levels have fallen in the Downtown ponds. The water that remains has an unhealthy film across its surface, and there are none of the coots and moorhens that were formerly ubiquitous. The resident heron hasn't been there for months. A great shame.

I crossed the pond and ran into a cyclist who was standing next to his bicycle, which was upside down, wheels in the air. I expressed concern, but he assured me that a minor adjustment was all that was required. to get it moving again His name was Nigel. I walked with him as far as Globe Pond and he told me that his father lives in the area, which is how he found out about the Woodland - and now he brings his own children to enjoy the place. 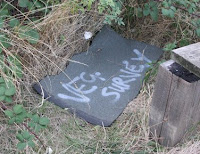 From Globe Pond, where the ducks were enjoying the water and the circular pontoon, I went up into Stave Hill, going up the steps and crossing the path to walk past the windmill. From there I went to the Stave Hill pond and on to check out the graffiti on Stave Hill itself. Apart from a profusion of human bodies around the area there was almost no life to be seen. Even at the pond there were no damselflies or dragonflies, and nowhere were there hoverlfies, bees or butterflies. Maybe I arrived too late in the day. The story was the same in the "butterfly sanctuary", the area behind Stave Hill which extends towards the Woodland. The thistles, which are a huge attraction for the bees and butterflies, are now well and truly over and even the late flowering plants are beginning to fade fast. I was able to confirm that the wild marjoram truly is wild marjoram (the leaves had a terrific aroma). Throughout the ecological park there were large pieces of greenish fabric with the words "veg. survey" written on them - presumably something to do with TRUE.

As I arrived at Stave Hill someone else was up there photographing the bronze map. As he said, the view from the top of Stave Hill is remarkable, and the light was particularly interesting yesterday. It was bright but hazy, so everything in the distance seemed slightly ethereal. In particular the Gherkin and Tower Bridge looked like two-dimensional tissue paper cut-outs. Very pretty.

When the other photographer had left I had a look at the graffiti situation. Just as Steve reported, the graffiti on the Stave Hill sculpture and plinth has been reduced but not eliminated. Basically, there is still a lot of paint on the plinth but enough of it has been removed to ensure that it no longer spells out a word. On the bronze map itself some of the lettering along the perimeter is still picked out in bright red. I wish that the paint had been removed entirely, but it is certainly better

than nothing. I have no idea if the removal of the graffiti was carried out by the council or by a private party who decided to take matters into their own hands.

Back at home my own patio garden looks much like the vegetation in the parks - it is very much in a state of decline. I've been dead-heading flowers for weeks, and the last of the tomatoes will be ready to be picked soon. It has been a tough year for the garden. Right on the edge of Greenland Dock it always suffers from the sharp breezes, but this year the lack of consistent sunshine and the excess of rain have led to much of it rotting before my eyes. On one day alone the wind removed every apple from my dwarf tree. The clematis never flowered, and the lovely white abutilon, which has been with me for years, was one of the sadder terminal cases. The mint has flowered and the parsley has gone to seed. However, the snapdragons (antirrhinum) are still going strong and I spent several minutes deriving considerable enjoyment watching a bee moving from flower to flower, vanishing completely and reversing out again, mission accomplished.

I'll post more of yesterday's photographs over the next couple of days.