Les Butler at Stave Hill and RDW at the weekend 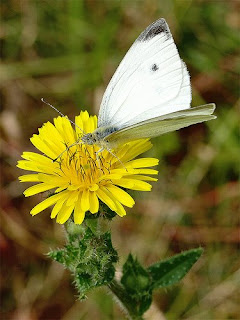 I didn't make it over to the parks this weekend, but I am very glad to report that Leslie Butler did! Thanks very much, Les, for letting me know what was out and about.

Les made a brief visit to Stave Hill Ecological Park on Friday evening (at around 6.30pm) to see what was about. It was very breezy, so not many butterflies were there - just a few regulars like Gatekeepers and Meadow Browns. He managed to get a few pics of a dragonfly near to the windmill. There were a few bees and hoverflies, and not much else.

Les was back in the parks on Saturday at around 1pm taking advantage of the occasional bouts of sunshine. There were plenty of Gatekeepers and several Meadow Browns about. A few blue butterflies, probably Common Blues were out and about. They are a favourite of both Les's and mine because, as he says, they are so truly beautiful. A surprising occurance: as if from nowhere around thirty white butterflies came into view. Most flew past, but a few settled within reach of Les's camera. He saw a new (to him) species of hoverfly?, with vertical black stripes on its back. Close to the windmill he saw a Speckled Wood butterfly, the only one he has seen on his visits. He sat and watched Gatekeepers (or Meadow Browns) chase off the occasional white butterfly which came close. They would continue the chase for about 20 or 30 feet, and it looked as though contact was made on occasion.

I wish that I had got my act in gear and made a visit myself!

Have a look at his photographs on Flickr - they are excellent. The photograph on this page was taken by Les on the 2nd August and I've copied it from his site.