Back in the park after a week in the dust 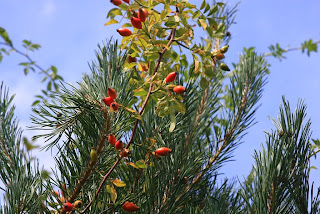 After a week stuck indoors clearing out an academic's office and becoming liberally covered in ancient paper dust, and then sorting through storage boxes in a really filthy storage facility in north London, I was hoping for a bit of sunshine yesterday - just a bit - so that I could get out for some air. I woke to rain on my bedroom window and wind whistling through the slight opening. A visual check confirmed that it was fairly vile out there. I had decided to take a day off from the archiving but it hardly seemed worth leaving the house so I updated a few websites and scanned in a few more documents. But by early afternoon the rain had stopped and although the sky was an unremitting grey the light was quite bright and looked safe enough to go for a stroll with the camera.
Fortune smiled on me and I found myself in Stave Hill Ecological Park in the sun. This vanished from time to time behind clouds, but on the whole there was more sun than cloud. The sunlight was particularly bright. Whenever it came out it blazed with heat. 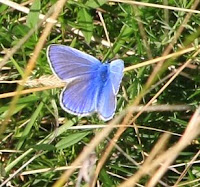 The park really is in the process of bedding itself down for the autumn. Seed pods and berries are the order of the day, and the cones on the evergreen in the Stave Hill wildlife area have gone brown. Everything but the scabious and dandylions are going over rapidly. There were lots of butterflies out today - meadow browns, whites of various sizes and two different types of small blue. They seemed to be attracted mainly to the remaining thistles, to the scabious and some simply settled on broad leaves to take the sun. The dandylions don't seem to attract the butterflies at all but do appeal to the bees, hoverflies and other flying insects.

At the pond behind Stave Hill there were almost no damselflies and only a few dragonflies - although one of the latter was an absolutely vast blue one, which swooped to and fro over the pond but refused to settle to be photographed. There were some bizarre poles decorated with tinsel, foil, tissue and coloured paper both around and in the pond itself. I wouldn't like to hazard a guess about what that was all about. But I wish that whoever is responsible for the mess had taken the mortal remains home with them to dispose of properly. The one waterlily is now fully in bloom, its dark pink petals clustering around a bright yellow centre.

The sunlight through the leaves and the berries against the blue sky were very beautiful and I took a lot of photographs, just to capture the colours.

The walkway from Stave Hill towards the Russia Dock Woodland was particularly lovely, with dappled sunshine flickering through the leafy tunnel and making patterns on the ground.

I had the place almost totally to myself, apart from a couple of dog walkers, a man pushing a crying toddler in a pushchair and a man on a bicycle. The green was completely empty on my way into the park at around 1.30, but on my way back home there was someone practising golf swings.

The water in the Downtown ponds continues to be very low, in spite of all the recent rain. 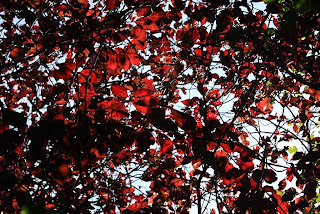 I will be posting more photographs from yesterday's sortie during the week. 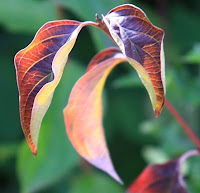