Oh well, I guess that the rain is good for my tomatoes

Sigh. One can have too much of a good thing. Autumn started in April, hesitated briefly for a fortnight of summer weather (which happened for the two weeks that I was stuck in an office) before resuming its dreary trend. It rained all morning. I pulled up my potatoes yesterday, and they have clearly benefitted from the rain, and the tomatoes are continuing to grow. Still, a bit of sunshine would be soooooo welcome!
I finally made it out of the house for an hour to go and hunt for yesterday's cat (by no means the first time that I've had to cat-hunt, and I'm still somewhat haunted by the outcome last time this happened). There was no sign of it, in spite of me making a picture of myself by issuing all the usual cat-friendly noises. I hope that its absence is a good sign and the friendly little thing found its way home. 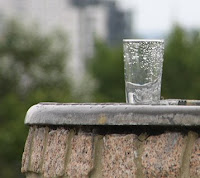 One thing that is still there, which I was rather hoping wouldn't be, is the graffiti. I'm in danger of becoming obsessed with the thing. An interesting and slightly surreal variation on the original theme was the addition to the sculpture of a pint glass with the dregs of a dark beer in the bottom.

Apart from that there's nothing much to add to yesterday's post. I collected some blackberries and I was pleased to see that I was not alone - a woman with two young boys was on the same mission. Local failure to leap on the blackberries reminds me of living in Spain when I was a teenager - we could have dined off frozen blackberries all year round because no-one in Barcelona used to collect them from the surrounding hills, where they grew in profusion. The plans are a) blackberry sauce to accompany roast duck and b) blackberry and apple crumble made with a recipe that is so full of butter that it is almost guaranteed to bring on heart failure.

In the past it was used to flavour liquers. It has a strong flavour. Achillea was named for Achilles the Greek hero who was reputed to be the first to use it for medicinal purposes. Milleofolium means thousand-leaved

Cragaegus is thought to derive from the Greek kratos, "strength". Monogyna means that it has a single pistil.