Update re The Clipper pub 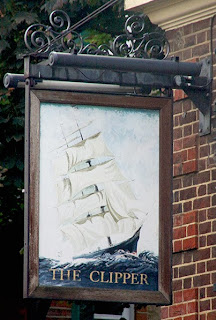 There has been a lot of interest in the future of The Clipper, on Rotherhithe Street.  A 1930s pub located opposite the Hilton Hotel, it was sold recently to developers by the brewery, Enterprise Inns.   Thanks to @brob11 (Twitter) for the information that the Propel Newsletter has an update on the plans for the building.  The Propel.info website describes itself as "a daily free-to-air newsletter for pubs, restaurants and food service operators."

Developer buys Rotherhithe pub for just under £1m: The Clipper pub in Rotherhithe, South London less than 100 metres from the Thames has been bought buy a developer for just under £1m to turn into upmarket apartments. Panayiotis Themistocli of the agent AG and G said: “There was a lot of interest, with 14 offers – it lies opposite the Hilton Rotherhithe and has good transport links, including the Thames Clipper river boat. The Clipper was always going to appeal to developers.”

Julie, who managed The Clipper on behalf of the landlord Joe Springate, also landlord of the Moby Dick in Rotherhithe, is now working at the Moby Dick (and hosted an excellent Hallowe'en party there last weekend). I have been checking for a planning application for the site, but have not seen one yet.  I assume that the developers are currently pulling together the documentation to describe and support their plans for the site.

The Hilton Hotel opposite The Clipper has also been put up for sale, the sales brochure highlighting it's benefits for conversion into residential use, but although there are rumours that it is about to be sold to another hotel chain, nothing has been published and therefore remain unconfirmed.

Finally, rumours that the Scotch Derrick and basketball pitch site next to the Custom House block on Odessa Street are about to be replaced by a new housing project are similarly unconfirmed but seem plausible.

And now The Ship York
http://planningonline.southwark.gov.uk/AcolNetCGI.exe?ACTION=UNWRAP&RIPNAME=Root.PgeResultDetail&TheSystemkey=9552195

That will leave just one original pub building - very sad :(

Thanks for letting me know James. That's such a shame. I hadn't heard rumours of this either.