London Engineer was a paddle steamer built in Rotherhithe, to an inventive design, by S and D Brent at the Greenland shipyard.  Messrs Brent were Samuel and Daniel Brent.  The penultimate incarnation of the great company Randall and Brent, which operated out of Nelson Dock on Rotherhithe Street where the Hilton Hotel is currently located, Messrs Brent moved their operation to the Greenland South shipyard (at the entrance to Greenland Dock) in around 1805 until 1819.  In 1819, when Samuel Brent died, the company was registered in the name of Daniel Brent.  London Engineer was manufactured in 1818, when Samuel Brent was still alive. 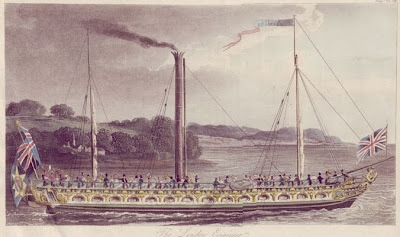 One of the earliest experiments in the design of pleasure steamers on the Thames, she was the first vessel to be based on an 1808 patent by Richard Trevithick (a famous steam engineer, probably best known for the Puffing Devil) and Robert Dickinson.  These were the early days of paddle steamers and still had a lot to prove before they became mainstream Thames pleasure cruisers, tug boats, traders and eventually naval ships.

To put matters into perspective, even though early 20th Century ships like the Titanic (launched 1911) were powered by steam, the only significant form of propulsion for ships traveling the globe in the mid 19th Century was still sail.  The Brents had built two sailing warships for the Royal Navy and three East Indiamen between  1807 and 1813, only a decade before they built London Engineer.  The first paddle steamer service on the Thames had been launched four years before London Engineer was built in 1814 and by the time that tea clippers like the Cutty Sark (1869) and Lothair (1870) were braving the seas between England and China, paddle steamers had become fixtures on the Thames, as ferries, pleasure cruisers and tow boats, and were also proving themselves on the open seas as well. Eventually paddle propulsion was replaced by screw, sail was replaced by steam and the maritime world was changed forever.  London Engineer was one of the pioneer experiments of this process. 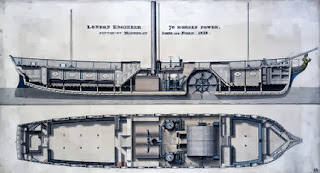 London Engineer was made of wood, was 120ft long with a beam of 24ft. She had a central funnel and two masts, and looked perfectly enchanting judging by the painting above by Rudolph Ackermann. She was equipped with two 70 horsepower bell-crank engines and boilers fitted by Maudslay, Sons and Field (Lambeth), which powered two paddles at 28 revolutions per minute.

The paddles were unusual in being completely encased, airtight but open to the water, so the water that drove the paddles had to be maintained at a constant rate.  This was achieved by air forced into the waterway by two air-compression pumps, which lowered the water level in the casing.  Although ingenious in theory, the paddle motion carried away the air and the water rose as a consequence, which interfered with the propulsion of the wheels.

London Engineer was put into service in Margate in 1818 as a packet boat to carry passengers between Margate and London.  Unfortunately, in spite of a comfortable saloon for her passengers and a big deck area, she was not a success and was soon taken out of service.  There's no indication of what happened to her, but it seems likely that she was broken up and her engines and fittings used in another vessel produced by Brent.  The concept of her innovative internal paddle was not, however, abandoned and was later adopted by the Daniel Brent for the design of Rising Star, which in 1820 crossed the Atlantic and entered the Pacific for work as a warship in the Chilean War of Independence.