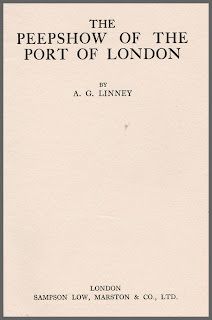 There are a dozen things that I ought to have been getting on with, but when A.G. Linney's book Peepshow of the Port of London turned up a few weeks ago, I just had to dive straight in.  I had been looking for this book for ages, because it is frequently quoted as a good source of information about the Thames in the 1920s, when Linney was investigating every nook and cranny along the river and writing about his experiences.  It proved to be elusive, but it eventually turned up on my Amazon wishlist.

Published in 1929, between the First and Second World Wars, Linney wrote Peepshow when London's docks were all still operational. Linney could see signs of decline at that time, and it clearly concerned him.  Through Linney's eyes, the Port of London as a shipping destination was a vivid, vibrant world of ships, their cargoes, Thames-side buildings and a wide spectrum of the people who worked at the docks and wharves.

Linney's writing is full of energy and enthusiasm.  He saw romance and drama in the docks and their activities, and this comes over unmistakably in the way he writes about the world he was exploring, even down to the poetry of their names:  "To my thinking it is in the names of the stairs and the causeways and the ferries and the draw docks that the romance of the waterside is most quickly to be discerned.  On maps and charts there are names that catch the eye and grip the imagination so that one feels a spurt of interest."

Unlike his later book Lure and Lore of London's Rivers, this is not a geographical tour from one end of the tidal Thames to another.  Nor has he taken a historical approach, although he does give some accounts of the past of some of the sites he describes.  Instead, Linney has picked topics that attracted him, and has woven a travelogue around them.  The result is an elaborate and engaging mosaic of narrative descriptions, supported by a lot of black and white photographs most of which are from the author's own collection.  It's more lyrical than empirical, but it reads so smoothly and shares a huge amount of knowledge with the reader. 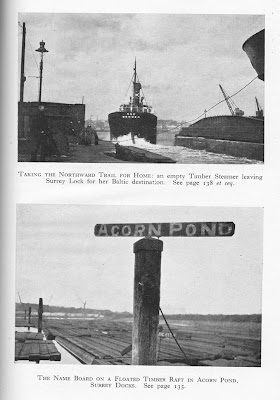 Linney's interests are broad, so as well as some wonderful descriptions of how things looked, and some lovely descriptions of ships using the docks, he goes into the nuts and bolts of how things operated as well.  There are great descriptions, for example, of the cargoes handled at various docks and how these were processed and sold. His section on ivory at the London Docks is particularly fascinating.

At all times Linney's enthusiasm and imagination draw the reader in to his perception of the docks and warehouses as endlessly intriguing places where produce of the world, everything from spice and ivory to flour and wool converged.  This comes over most strongly in his three chapters on the London Docks:  "Sometimes I stand by the main entrance to the London Docks and watch a wool-laden lorry go out and seek to let my imagination follow its contents from source to finish.  I see the vast sheep-runs of New South Wales, Queensland, and South Australia, with their flocks numbered in millions;  I see the shearers at work in their sheds;  I see the wool wagons and the railway trucks making for tidewater; I see the big steamers headed for London River; I see the tug bringing up her train of lighters."   Elsewhere, some his descriptions are rather more prosaic and underwhelmed, most notably his description of the notoriously difficult launch of Brunel's Great Eastern, a ship that he describes as "this famous monstrosity." 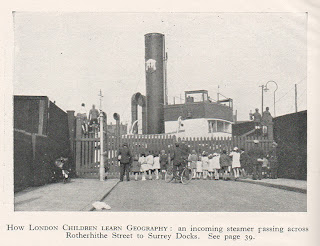 There are also two chapters about Rotherhithe, because Linney was particularly attracted to the commercial shipping and dockland operations of the Surrey Commercial Docks.  They are Chapter XIV, The Fascination of Surrey Docks and Chapter XV, Round the Rim of Rotherhithe.   He was intrigued by the reputed insularity of the residents of the Downtown area of Rotherhithe who, "it is often said, have never ventured as far afield as the 'mainland' (Jamaica Road, Lower Road etc) and have passed all their lives by Surrey Docks.  To them the West End is actually as unknown as Timbuctoo."  Other areas covered in dedicated chapters are London Dock, Blackwall, the Isle of Dogs, Dagenham Reach and West India Dock.  Otherwise his chapters are more generic, with titles like Romance by the Riverside I and II, Over and Under the River, Side Streets and Hidden Rivers and The Wonder Warehouses of London, I, II and III.

This is a real mixture of history, field observation and anecdote.  Linney loved the Port of London, and this comes over clearly in his writing and his photographs.  If you are looking for an engaging and useful account of the Port of London in the 1920s, this book provides the perfect snapshot of the docks, wharves and river at that time.

haha!! Andie you are incredible, i found this book as elusive as you, mainly due to my poor memory and couldnt remember the name until someone mentioned the name to me again a few weeks back and bang straight onto amazon and found it and bought it, trouble is now i have to find time to read it, i am so glad you done a review

All the best Michael A Reardon :)

:-). Fortunately, it's one of those books that you can read in bits and pieces when you have time. It's such a good read, too, that the time flies by.