Ian Visits has been to "An American in London: Whistler and the Thames" 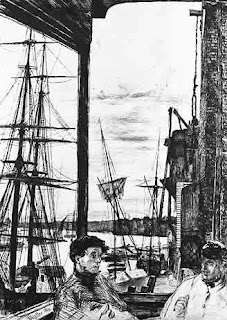 The weekly email newsletter produced by Ian of the fabulous Ian Visits website has listed an exhibition at the Dulwich Art Gallery called An American in London: Whistler and the Thames.  It is on from today, 16th October 2013, until the 16th January 2014.  See Ian's write-up of the exhibition here, with photos.

I have been unable to find out the full list of paintings and illustrations, but Whistler painted a well known series of scenes which include some of Rotherhithe (see photo right) and I do hope that one or more of them are at the exhibition because I've never seen any of them in the flesh, in spite of being an art nut.

James Abbott McNeill Whistler (1834-1903) was American born but moved to Russia with his family in childhood, where he was trained at the Imperial Academy of Fine Arts from the age of eleven. After a brief period studying in Britain his family moved back to the U.S. and he went with them. Although he chose to attend the military academy West Point he was rebellious and far from suitable, and after leaving took up work as a surveyor, mapping parts of the country.  Again, he was ill suited to the task and decided that art was his true calling, moving to Paris, France, in 1855 to resume his artistic studies. In the late 1850s he  chose to live in Britain but returned frequently to France.

The exhibition will be well worth the visit whatever they have on display, because Whistler had a real genius for capturing atmosphere.  His interest in portraying a whole range of different lighting effects was hugely influential on later artists and means that there is an enormous amount of variety in the tone and feeling of his work. He really loved painting the Thames, both its glamorous facade and its hard-working core.  Everything in Whistler is so finely observed and his ability to get to the heart of things is always impressive. There is so much more to his work than his most famous pieces, and if you hadn't already guessed by all the superlatives, I am sooooo looking forward to this!

You can see a sample of some of the paintings on Ian's write-up, above.

Somewhat embarrassingly, I had no idea where Dulwich actually was, but it turns out that by rail it is only 12 minutes from London Bridge, with a walk at the other end, and other travel alternatives are shown on their website.

Thanks to Ian - I wouldn't have known about it without him.

If you want to find out more about Whistler's career, there's a good precis on Wikipedia, sourced mainly but not entirely from the book James McNeill Whistler: Beyond the Myth by Ronald Anderson and Anne Koval.