The foreshore on Saturday 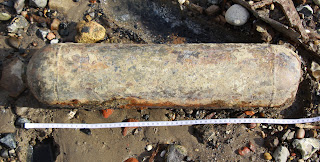 I was supposed to be going along to do some survey work with the Surrey Docks Farm Research Project today.  It was cancelled due to the torrential rain and is now rescheduled for 26th October.

Yesterday, unsure if I would be able to make it today anyway, I went  down to the Thames foreshore at low tide to see if I could find anything to contribute to their search.  I used the watermans stairs at Surrey Docks Farm, walking as far as the Hilton and back.  I was in hiking boots, not wellies, so I didn't venture out very far into the mud, which can ooze well over ankle level. Somehow I still ended up looking as though I was wearing asymmetrical blue warpaint when I arrived home.

I wanted to have a closer poke at a long cylinder that I had noticed last time (photo above), to see if it had any markings, but although I cleaned it off there was nothing to be seen.  It weighs an absolute ton. The cylinder itself is undamaged and may have its original contents in tact. On closer inspection it has connections at both rounded ends, so it may have had taps and hoses.  It continues to intrigue.

As well as bagging a bit of London stock with very characteristic burned holes, more for sentimental reasons than anything (I became quite fond of it whilst researching it), I trundled around amongst the brick that was dumped there after the Second World War.  The brick dump was an exercise of clearance following the wholesale destruction of the Downtown area during the Blitz.  I'm vaguely interested in where building materials came from and how far they traveled from brick factory to building, so I took some photographs of factory names fired into the brick and will look into that a little more.  Many of the bricks are too water-worn to be of use, but in some cases the manufacturer names are incredibly clear.  Liberally scattered around are red bricks from Marston Vale (Bedfordshire), mixed red and yellow "Phorpres" examples from the London Brick Company (Peterborough) and yellow bricks from Milton Hall (Essex) brickworks.

The real find of the day was in the clay pipe department. I found two interesting pieces, as well as a lot of short pieces of unmarked stem.  The first of these pieces was a very plain bowl, with a heel and a centimeter or so of stem, without markings.  From its shape alone it is difficult to date.  Pipes with bowls of this shape were made from the 17th to the early 19th Centuries.  The other piece is certainly later in date and it is, superbly, completely in tact.  I found it immediately under the Farm's foreshore.  As you can see from the photograph, it has little decorative bumps on the bowl and stem called "thorns" (pipes featuring this are referred to as thorn pipes).  There are two identical lines of leaf motif, the outer line partly damaged, from the base of the bowl to the top along each of the seams at opposite ends, in line with the pipe stem.  Both were common features of late 19th Century pipes, as was the very short length.  There are no manufacturer markings, which is real shame, and may be because the area immediately beneath the bowl has been damaged.

I also picked up two bits of ceramic, just because I liked them, and a piece of jet black rock that I've now posted to my friendly local geological expert to sort out for me (photo below).  There are all sorts of different types of stone scattered over the Thames foreshore, including piles of flint, but this is particularly distinctive, jet black with percussion ripples, and looks remarkably like a rather rough form of obsidian or even basalt. There was nothing remotely similar that I could see anywhere else along the foreshore, but I daresay it will turn out to be something very tame!  Rocks have an unfriendly habit of looking as though they may be something really exciting before turning out to be simply a different colour or form of something fairly bog standard. I'll report back when I know for sure what it is.

Pottering around in the mud and stone is far from glamorous (somehow when I arrived home, wild-haired, my face was liberally painted with blueish mud, making me look more like Braveheart than a respectable local citizen), and none of the finds that usually turn up have any financial value, but the odds and ends that have emerged on the few occasions that I've walked along the foreshore have been endlessly interesting.  It is a terrific way to spend some spare time.

As I was returning to the steps back to the real world, one of the modern Mississippi-style stern-wheeled paddle steamers went downriver.  I had no idea that there were any of these still carrying tourists on the Thames, although I've seen them moored at Tower Bridge.  It looked distinctly odd passing Canary Wharf!  The paddles are purely decorative, of course. 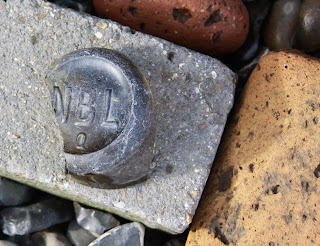 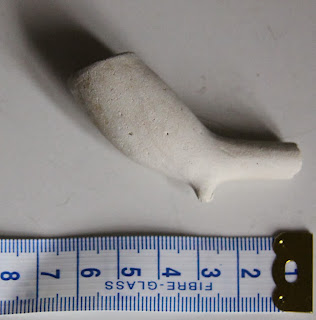 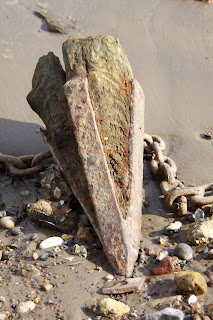 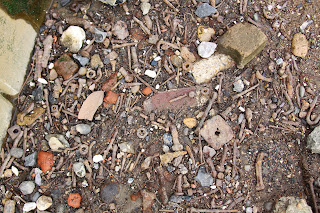 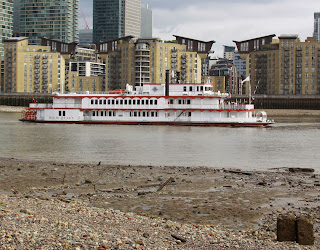 Hi Andie,
I go onto the foreshore myself quite often looking for clay tobacco pipes, which are a particular interest of mine.
The form of the pipe is in fact the most accurate way to date a pipe.
Most London made pipes were either unmarked or were only marked with initials.
which in most cases means they can't be attributed to a particular maker.
The plain pipe you found dates from 1690-1710, and the knobbly pipe is indeed 19th c

Hi Richard. Thanks very much for the comment. It's always great to have some knowledgeable input. I have a couple of unmarked ones, but two do have markings. I looked them up on the Museum of London's database but was unable to match them to a maker. I'm a bit wary of being on my own in the mud, which can have powerful suction, so I haven't been much beyond the stone areas, but I am always staggered by the sheer number of clay pipe fragments littered around.