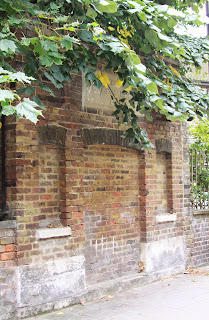 It is now very easy to miss as it forms part of the park's wall, its top half almost invisible due to an overhanging sycamore branch (which could really do with a serious hair cut).  I'll try to get a better photograph of the visible bits when there isn't a car parked in front of it.

The engine house was a fire station and was home to a single fire engine, which was a hand-operated fire pump on wheels. I've had a hunt around for what it might have looked like, and the only example that I could find is from Edinburgh, and after looking at the entrance to the watch house looks too big to have fitted through the door - it must have been a relatively small and simple piece of equipment. 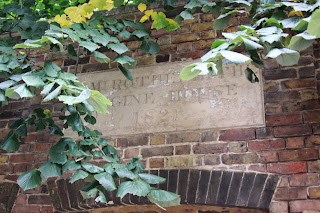 The remaining facade is simple, with two windows, a large entrance that takes up a third of the overall width of the building facade and a stone panel over the entrance which gives the name and date of the building:  ST MY ROTHERHITHE ENGINE HOUSE 1821. Built of mixed stock brick, including London stock,  in a Flemish bond pattern, the little building has stone coping (i.e. covering) along the base of the walls. The windows are topped with gauged brick segmental arches, which have absorbed much more atmospheric pollution than the ordinary bricks, which can be clearly seen on the first of the two photographs at the end of the post.  Both windows are equipped with stone sills.  Two square panels recessed into the brick flank the stone panel, and appear to be purely decorative.  It was impossible to get a sensible photograph of them due to the tree, but they feature on the watch house too, and can be seen clearly on the photograph on that post.  The brickwork needs repointing in places where the mortar has fallen out.

Although it's a shame that it is no longer actually a structure, just a facade that is incorporated into a wall, it is great that it has been preserved to some degree.  It has a grade II listing.