The meaning of Rotherhithe and Redriff

It occurs to me somewhat belatedly that I have never actually posted about the meaning of the name Rotherhithe, and its alternative Redriff.

The hithe part of Rotherhithe, as with Greenhithe, comes from hythe and means haven, harbour or landing place, but the "Rother" part of the name has been interpreted differently by different writers. Favoured interpretations of the full name Rotherhithe are mariner or oarsman's landing-place (from tothra and the Saxon redhra) and landing-place for cattle (from the Saxon Hrȳðer for cattle and hȳð for harbour). 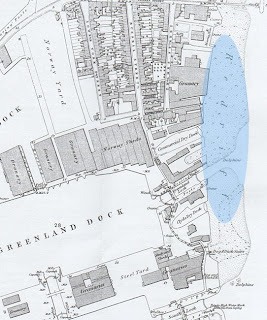 Rotherhithe was also known as Redriff or Redriffe, the name by which local residents seemed to know it.  The name may have referred to a red gravel that was visible at low tide.

On the 1868 Ordnance Survey map the foreshore area is marked as Redriff all the way along the Rotherhithe section of Limehouse Reach as far as Cuckold's Point (Nelson Dock / the Hilton hotel).

Redriff is the name by which Samuel Pepys referred to Rotherhithe and the place that Jonathan Swift chose to make the home of Gulliver in Gulliver's Travels. Daniel Defoe called it by both names in his A tour thro' the whole island of Great Britain, but seemed to think that Rotherhithe was the name applied to it by locals (an inversion of the conventional wisdom on the subject).

Looking at the 1805 map at the top of this page I wonder if Redriff was used to refer just to the peninsula, rather than the larger area now recognized today as Rotherhithe, which extends to the south of Lower Road and includes Southwark Park.  On the map, the interior marshland is clearly marked Redriff Marsh, whilst the village itself is named Rotherhithe.