The recently installed and already rusting Sustrans Portrait Bench at the side of Greenland Dock has actually been designed to rust. Designed to discolour, degrade and become progressively hideous.  Rust is associated with derelict buildings, decay and scrap heaps.  It is ugly.  Rust, last time I looked, was one of the things that the London Dockland Development Corporation spent quite a considerable amount of time and expense removing from the area.  How lovely of Sustrans and Southwark Council to move it back in. 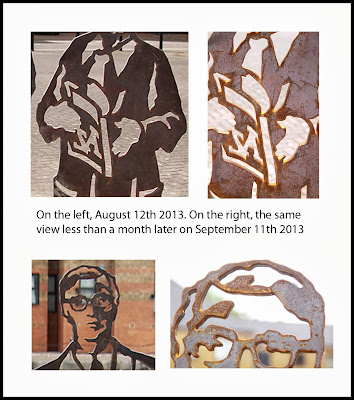 I am particularly vexed that Southwark Council did not make this transparent when they published a planning notification.  When I saw the notification of the planning application in Southwark News I tried to find out more about it and failed.  Not only did the Southwark Council website not have any useful information in their Documents or other sections under the planning application number, but a phone call to the person on the printed notice revealed that she was not the person responsible for that particular planning application.  She gave me the correct contact details, but a phone call followed by an email to the planning bod actually allocated to the job, Terence McLellan, resulted in absolutely no response.

In response to recent questions by Southwark News investigator Oliver Pugh, Councillor Barrie Hargrove, Cabinet Member for Transport, Environment and Recycling said: "The Portrait installation is made of special weathering steel that is commonly used in outdoor sculptures and large structural projects. It is expected to rust particularly within the first year of installation. This in itself forms a protective layer that ensures the art has a long lifespan and avoids the need to fund costly maintenance such as painting."  The Sustrans website itself says that “The Portrait Bench is a simple bench with three life-size characters chosen by the community for the contribution they have made to local life, culture or history. The figures are 2 dimensional cut from Corten steel (like the famous Angel of the North) so they will weather to a fine rust surface and become a natural part of the landscape.”

Errrrrr - just to point out the obvious, rust is not something that residents usually want to become a natural part of a residential landscape, which being full of houses and former dockland features is about as far from natural as one can envisage. This is a man-made landscape and it requires maintenance.

Saving on maintenance expenses at the cost of basic aesthetic considerations cannot look reasonable even on paper, because it must be obvious that decay is likely to alienate anyone who has to live in its vicinity.   This type of pseudo-organic/green argument, employing ideas of natural decay and self-preservation to justify cost-saving and lack of maintenance, undermines the really good work carried out by people who are genuinely committed to both local ecological projects and sustainable public art.   We have plenty of other local outdoor art that has neither rusted nor deteriorated in any other way and is often much-loved by local residents.  The rusty Sustrans sculpture does not come into either category; not only have many local residents expressed how unimpressed they are by the rust, but its condition inspires so little respect that some of the local fishermen have started using it as a convenient coat-hanger. 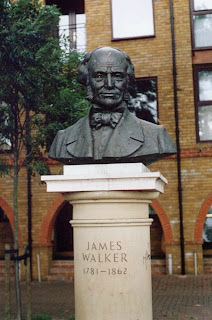 James Walker, the engineer of the 1900 extension of Greenland Dock, was portrayed by lovely sculptor Michael Rizzello in 1988 and was installed in the same corner of Greenland Dock that the rusting Sustrans structure now inhabits.  James Walker has been standing just 10 feet away from the location of the Sustrans travesty for nearly 20 years without a hint of rust.  That's because Michael Rizzello was a true artist and he had standards, and so did those who commissioned his work.

If anyone took the time to ask Michael Caine's permission to capture his 2-D likeness when planning this sculpture (he being the only one of the three people depicted to remain alive), I do wonder if they told him that he was expected to decay substantially within a year and would be distinguished by an all-over coating of rust for as long as his image lasts.

There is so much good going on in Rotherhithe, and so much to celebrate.  It is a sad reflection on Southwark Council that they should undermine all that by agreeing to place something that is beginning to look like scrap on a nice corner of Greenland Dock. This sort of sloppiness and cost-cutting, dressed up as sustainable art and design, is quite simply insulting to those of us who have to live with it, and to those artists who have contributed excellent public art projects that manage to be both sustainable and attractive at the same time.

It's such a shame.  It looked really quite civilized when it was first erected with its smart, shiny black surface.