More tall ships on the Thames

A friend and I went into Greenwich on the Thames Clipper today to see a movie at the Picture House just on the edge of Greenwich town centre, so much nicer than any of the vast 10-screen box-like cinemas that have popped up next to shopping malls and superstores like particularly malevolent mushrooms.

On the way there we were lucky enough (or at least I was - I may have driven my friend mad with ship-talk) to see three of the tall ships that were taking visitors up and down the Thames. I saw the first one out of the corner of my eye when I was walking down Greenland Pier, and turned to see a set of masts and yards silhouetted against the sunny sky (and took the photo on the left). A wonderful and completely gripping sight.  Although it is by far the worst of the photos it is my favourite.  Thalassa emerges darkly from the background on a silvery sweep of water, like a ghost from the past.

Heading upriver they were traveling exclusively under power; coming back downriver they all dropped some sail and looked very beautiful in the sunshine.

The ships that we saw today were the Thalassa, J.R. Tolkien, and Gulden Leeuw. They are all relatively modern, the oldest having been built in 1937.  Here are some snaps of all three.  I only had the baby camera with me, so the photos aren't great, but are better than nothing.  You can get a better impression of the ships if you click on the photos to see the bigger image.

It is great to have tall ships back on the Thames, even temporarily.


The three-masted Thalassa is a 45m long barquetine built in 1980 and restored in 1991. Note the very small but colourful mermaid figurehead (Thalassa was a sea goddess in Greek mythology). The ship has her own website dedicated to her charter career at: http://www.tallshipthalassa.nl/en/ 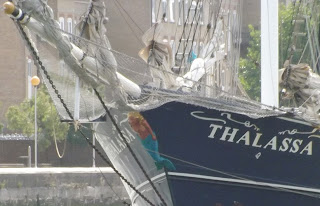 The J.R. Tolkien is a two-masted gaff-topsail schooner built in 1964 in Magdeburg and was rebuilt in 1996-1998 in Amsterdam.

Originally built in 1937 as an ocean-going ice-class ship for the Danish government, the Gulden Leeuw was originally named the DANA.  She was sold to P and T Charters in 2007 when she was renamed Gulden Leeuw and was converted to a 51 metre three-masted topsail schooner.  She has really very beautiful lines, and a lovely small lion's head as a figurehead (her name means Golden Lion).  The P and T Charter website for Gulden Leeuw is at: http://www.gulden-leeuw.nl/en/ 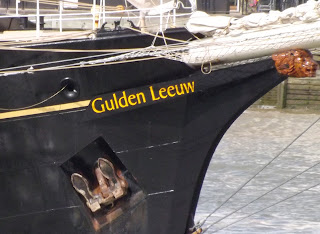