The Earl's Sluice was a natural water-course that flowed from Denmark Hill to the Thames.  It is thought to have been named after the Earl of Gloucester who was the Lord of the Manor of Camberwell and Peckham in the 12th Century.  It became known as the Earl's Main Sewer in the 1820s.

Until 1899 Earl's Sluice marked the boundary between St Mary's Parish in Rotherhithe (which was then Surrey) and St Paul's Parish in Deptford (then Kent). It is clearly shown on Cary's 1937 map (below), running along the dotted border marker where Surrey ended and Kent began, passing under the Grand Surrey Canal and Plough Lane (today's Plough Way) and emerging by the George Stairs just south of the East Country Dock (which was later expanded and became today's South Dock).

Earl's Sluice was also known locally, and far more evocatively, as Black Ditch due to its unlovely role as an open sewer.  Thankfully, it was eventually closed in some time after 1870.  Although not the most obvious subject matter for an artist, George Yates painted a watercolour of it in 1826 (at the top of this post).  The very poorest areas in Southwark during the early 1800s were in industrial Bermondsey and Rotherhithe, every gap filled by small, chaotic, often poor quality housing and overcrowding.  The unsanitary drains and a lack of proper sewerage brought with them a variety of fast-spreading diseases.

The Thames itself, fed by many of the drains and sewers that contained waste from houses and businesses, was part of the problem, supplying heavily contaminated water back unto people's homes for washing, cleaning and cooking.  In 1827 the water supplied by the Thames via a number of companies into homes was described by the pamphleteer John Wright as "a fluid saturated with the impurities of fifty thousand homes - a dilute solution of animal and vegetable substances in a state of putrefaction - alike offensive to the sight, disgusting to the imagination and destructive to the health" (quoted in Stephen Halliday's The Great Stink of London). 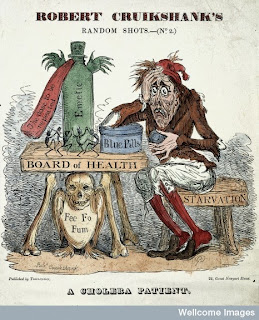 Although the problem of the quality of Thames water was eventually addressed, first by bringing in water from unpolluted rivers, and then by filtering water destined for domestic use through sand for decades, matters were so bad that by the mid 1850s the polluted Thames was a most unappealing malodorous entity, which was seriously detrimental to those living around it and using it. A number of outbreaks of water-transported cholera in Rotherhithe, for example, spread to Bermondsey and Southwark, where polluted conditions were compounded by dense housing.  Many people died. There were particularly bad outbreaks in 1849 and 1854. It was not known at this time that cholera was carried in water, but these tragedies did lead to a public inquiry that connected poverty and diseases, building on earlier attempts to reform London's sanitation systems, or the lack of them.   John Snow, to whom a page is dedicated on the Oxford University Press blog (widely credited with being the father of epidemiology) realized that cholera was partially water-born, but it took a very long time for his findings to be accepted.  Eventually, further studies eventually identified the links between poverty, inefficient disposal of human waste and disease in water sources, and the urgent need for clean household water.
A number of small natural rivers that drained into the Thames were used as open drains and sewers, and these too became badly polluted. One of these was the Earl's Sluice. It was described by a sanitary inspector for the period from February 1856 to March 1857 as follows (now preserved on the Wellcome website):


The first thing that strikes any person making a tour of sanitary inspection in Rotherhithe is the number of uncovered ditches its very boundary line for a long distance being a wide filthy black open sewer now there is no fact more clearly proved in medical science than that the inhalation for any length of time by human beings of the exhalations or effluvia from ditches drains or sewers is injurious to the health. 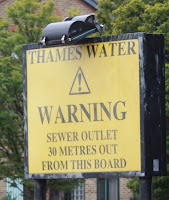 Eventually all of these rivers, which include the Earl's Sluice, and the better known Fleet and Tyburn, were enclosed and still run beneath London, and sometimes over it in pipes.

I am indebted to the London Geezer website for the details of the route it took.  Its source was in Denmark Hill, from where it flowed north through Camberwell, heading up Camberwell Road and then east along Albany Road, crossing the Old Kent Road before moving east again, and eventually heading up Rotherhithe New Road, where it met the River Peck near Millwall's stadium.  From here it headed north east.  A pipe containing water from the Earl's Sluice crosses the railway near Rotherhithe New Road. See Diamond Geezer's full account of the route it took before it emerged in the Thames at around St George's Stairs, where it is marked by a Thames Water sign as a sewer outlet.

A wall of the bridge that ran over the river, together with its boundary stone is preserved here, moved here as a memorial in 1988.   You can find it just to the east of South Dock on the Thames Path (photograph below). 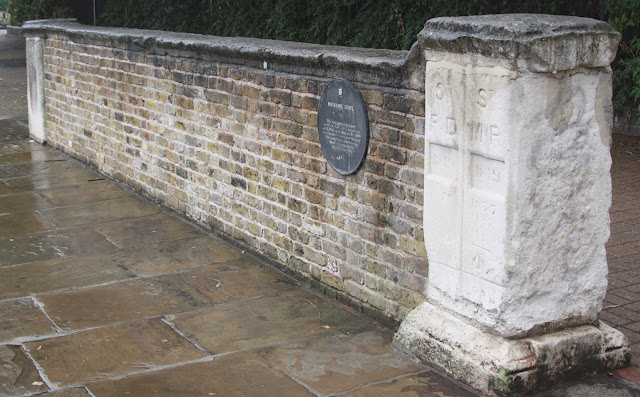