Cine footage of Rotherhithe in 1982 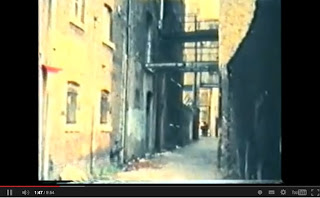 Local resident Michael A. Reardon and his family have been recording images of Rotherhithe for at least two generations, and Mike has been putting some of them on You Tube.  Here, on the London's Docklands Past and Present blog are the two parts of a video of Rotherhithe shot on cine film 1982, taken by Mike's father Mick.  The photo on the right is just a screen-grab to give a tiny preview, so go to the above page to see the videos.

Don't be put off by the variable quality of the opening sequence - most of it is very clear and it provides a fascinating glimpse into Rotherhithe just as the area was being turned from derelict industrial landscape (the Surrey Commercial Docks closed in 1969-70) into a thriving residential area, which is still being developed with yet more buildings.

Footage like this provides an invaluable record of the past.  Mike has his own corner of You Tube where you can see more video footage of the docks, past and present:
http://www.youtube.com/MichaelReardon
Posted by Andie at 22:46

This is really lovely to see, old pictures of locations that you know in modern times are fascinating. I recently transferred cine film to digital and it's lovely to see. Cine Film Transfer