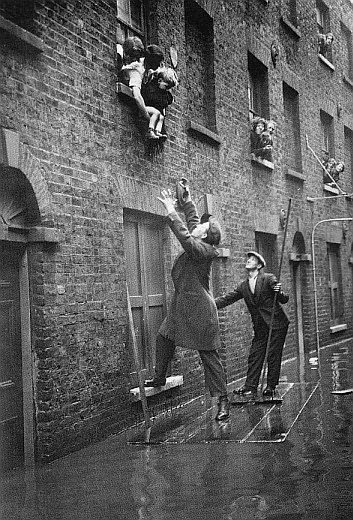 Yesterday I posted photographs of the 1928 flood in Rotherhithe.  One of them, shown here, is a classic, reproduced frequently in the media and on the web.  Today I dropped into the Moby Dick pub on my way back from the hellhole otherwise known as Surrey Quays shopping centre.  I was fortunate enough to run into a good friend who was with two mates, Steve and Fred, who I didn't know.  Steve and Fred grew up around here and told me some brilliant stories about the docks.  I mentioned the flood and the photographs, and asked if they had seen them because they capture a moment of local history so evocatively.  Steve showed me a photo on his phone and said, with a big smile, - you mean this photo?   And it was the photo on this post.

The child being lowered was Steve's father Peter Charles Awcock, and the woman lowering him was Peter's mother Ellen.   It's good to know that Steve's dad survived the handover process, which looks distinctly perilous!  One of the women looking out of another window was Peter's Aunt Lidya.  On the raft were two casual dock workers, Mr Tull and Mr Evans.  The photograph was taken by one of the Tull family, "Nipper" Tull, who Fred says were a big family in Rotherhithe up until the closure of the docks.  It is so nice to be able to put some names to the faces! The houses were the Mestaers Buildings, which is where the Amos Estate is now located, the old houses having been knocked down in the 30s or 40s.

I shall be torturing Steve and Fred for many more stories about what the area was like when they were growing up here.