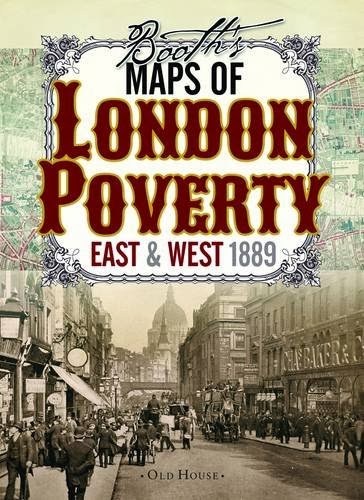 In this pack two maps are included, representing west London and east London in 1889. Booth was a remarkable man who set out to assess how wealth was distributed across the main residential areas of London. His undertaking was staggering. Appalled by the poverty he witnessed in the dockland areas he set about colour coding every house in every street according to how well off the families who lived in them were. His lowest rank is "Lowest Class. Vicious, semi-criminal, going up to "Upper Middle and Upper Classes. Wealthy." Between the two he identified five classes to represent the "general condition of the inhabitants." The maps he created as a result of his research were used to tackle social problems derived from poverty, and to plan reforms.

The maps in this edition are presented in a card folder, each with its own envelope to protect it, connected by a spine. When you open the folder, the interior surfaces contain an introduction to Booth's maps, giving brief details of what London was like, what motivated Booth to create the maps and how they were used. It also expands on the keys shown on each map.

When you lie east and west side by side it is daunting to see how polarized they were in terms of poverty, with the east showing great areas at the blue (impoverished) end of the scale, whilst the yellow (the top end) are confined to the west (albeit with some blue patches crowded into nooks and crannies)

The maps are reproduced on good quality slightly shiny paper, with all-importantly good quality colour reproduction so that it is easy to make out which colours are which (Booth used incremental shades of blue and red, which could have been very difficult to distinguish from each other in an inferior quality edition). Road names are easy to pick out and a grid sits over the top (the space between the horizontal lines representing half a mile). This is a really excellent pair of maps and essential to anyone interested in late 1900s London.

Thanks very much to the anonymous person who posted a comment and reminded me that there is an online project run by the London School of Economics called "PhoneBooth" that enables you to view different parts of Booth's maps with a series of overlays of London, using the + and - signs to zoom in on areas of interest.  The application is in Beta testing at the moment, and is a bit clunky to use, but it is an excellent idea and with patience works really well. http://phone.booth.lse.ac.uk/

Not sure whether you know of this project http://phone.booth.lse.ac.uk/

Thanks Anonymous. I did know about it and I cannot believe that I forgot to mention it on my post, because it was my first encounter with Booth and the reason I bought the print version of the maps! Thanks very much for the timely reminder. I'm going to update the post accordingly.

The phone.booth map and notebooks is of of the 1899 survey. The printed one is the 1889 survey. Both are useful, obviously, and comparison is interesting.

Even better! Thanks for pointing it out.