Walking donkeys on the Thames Path 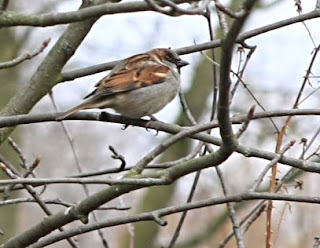 It is not every day that you come home the long way round, along the Thames Path, and run into three women walking a dog and two donkeys. Great to see. I very much like that fact that the Surrey Docks Farm donkeys are given a good outing from time to time.
I had been going to post some mail and buy a local newspaper but I still had my camera in my bag and somehow ended up in the park. Although it was not early there were very few people there, which surprised me for Saturday because even though it was quite grey it was also quite warm.

Even two days on has seen some changes, and I expect that this will continue to be the pattern for the months leading up to and throughout the summer. Lots more daffodils are in flower now, which is lovely, although many more are yet to come into bloom so there is still much to look forward to. I went to revisit the violets to see if I could narrow down the specie but was unable to do so. I really need to take my books with me next time.

I didn't see any foxes today, and there were no butterflies or bees, but there were squirrels, the birds were everywhere, small and large, and all seemed to have something to communicate. The Great Tits were particularly deafening, their distinctive call resounding across the treetops. A tree full of Goldinches was a terrific sight and an amazing sound. Different types of finch chattered and darted around, and House Sparrows were dotted around all over the

area, and I saw several Robins.

Of the larger birds the magpies were out in staggering force. Walking around a corner I sent a group of them into flight and counted seven. A few minutes later in a different area I saw another five, all on the grass together. The vast black birds were out in large number as well but I still cannot pin down what they are - either jackdaw (which I'm leaning towards due to the black beaks) or crows. There was an entire tree full of starlings who all looked at me without interest, but which proved to be impossible to photograph usefully due to the angle of the light.

Walking back along Greenland Dock I saw with amusement that Coots are again nesting on the pontoon by the blocked cut-through to the shallow remains of Norway Dock, in a vast array of rubbish. There were Great Crested Grebes on the main body of water in Greenland Dock and a few seagulls, but apart from some more Coots there was nothing else to see. There were no geese, which surprised me because they woke me this morning making the most amazing ongoing din. 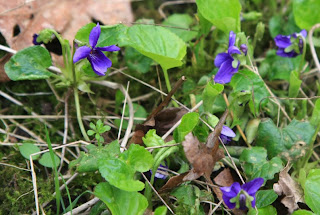 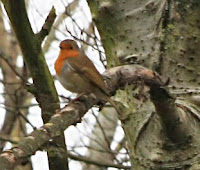 The big black birds are crows (carrion crows, technically). Jackdaws are smaller and have grey necks.

Thank you Mike - I was rather hoping to hear from you on this subject. Andie.