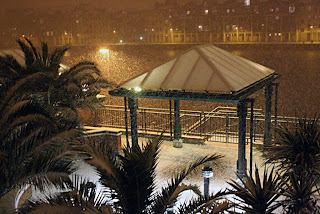 When I woke at 5.15am the sky was a milky peach colour. I was going to turn over and go back to sleep but I was intrigued I sat up and had a look. I found that it was thick fog, with snow, with the orange lighting around the dock diffusing through it. By now I was wide awake so I got up to have a look at the travel information on TV and the web.
In an hour's time I'm supposed to be making my way to catch a train from Euston to Chester, where my father is supposed to be meeting me. But it has snowed. No buses, partial suspensions on the Jubilee Line, cancellations on Virgin Rail's live online departures board (but whose website Service Update widget still say "0 Service Updates: There is currently a good service on all Virgin Trains routes"). Looks as though I'll either be walking to Euston or not going at all. My experiences with Virgin seem characterized by 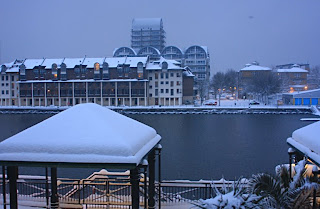 disaster. Last time I traveled north an aeroplane had hit the overhead lines, and on the return leg of that same trip overhead lines at Wembley were down. At least the website was being updated on both occasions, with clear instructions for passengers. The National Rail website has ground to a complete standstill. I dread to think what sort of traffic is hitting their servers.

Apparently it is the heaviest snow that we've received in the south east in 18 years
I wouldn't want to venture out on the roads today but people are struggling with their cars in Russell Place and managing to get them out of the carpark, albeit somewhat precariously. Good luck to them. There's at least two feet of snow on the walls outside my house and the palm trees look fabulously bizarre. The snow continues to fall thickly. Very beautiful but a damned nuisance.
Now where did I leave my woolly hat? I am going to need it. 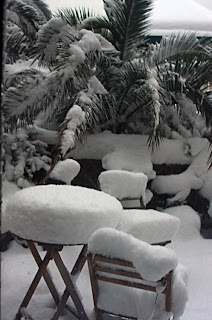 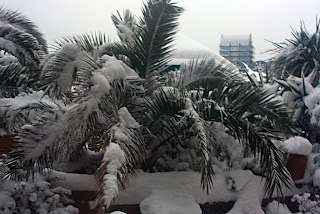 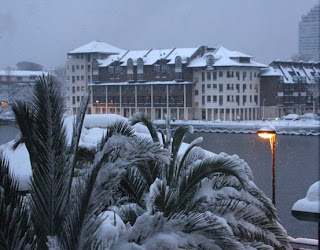