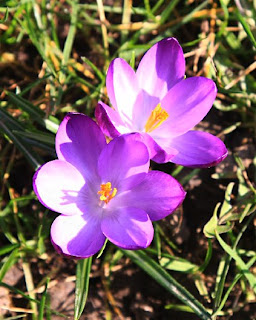 Today was remarkable. It is the end of February and today was less like a perfect Spring day than a perfect early Summer day - except that the plant life is all absolutely typical for the season. The ideal combination.
There are going to be hundreds of daffodils and a couple of the brave souls have stuck their heads out, bright yellow characters against bright green backgrounds. Crocuses were out in huge number, many in tidy beds prepared along the edges of Waterman's Walk, others scattered through the Woodland. One or two fugitive purple crocuses are popping up along the side of the green. Snowdrops are still out and look lovely in amongst the bolder colours of the newer spring bulbs. In a little corner of Stave Hill Ecological Park there were, to my absolute delight, violets. They come up in the same place every year. Daisies, so annoying in a perfect lawn, are beginning to come into flower and look lovely. The gorse continues to flourish a show of bright yellow flowers.

Even the trees were coming into flower, which may help me to identify them because I'm not generally very good at identifying trees.

There were birds in the trees, singing beautifully, but very few water birds. I spotted a Robin, a Acouple of Great Tits, Goldfinches, several House Sparrows and a small grey bird which I have so far been unable to identify. There were also a few pigeons and a couple of blackbirds.

I saw two foxes, the one of them first down at the Globe Pond stream which later moved to sunbathe where I photographed it before, and the second in the area behind the windmill. The one behind the windmill was in a dreadful state. If the scarcoptic mange goes untreated I don't think that we will have much of a fox population left by the summer. 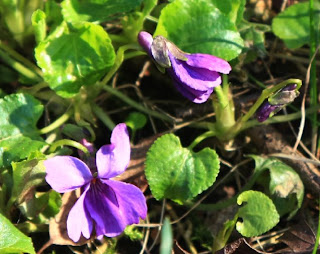 I disturbed a squirrel which is something of a novelty at the moment because they are so few and far betweeen. Before I went away in October last year they were virtually tripping people up at every corner and you could hear them everywhere even when you couldn't actually see them.

There is still very little in the way of insect life around. I saw two honey bees and a single bumble bee. To my amazement I saw a butterfly. In spite of the fact that it refused to settle even for a second I followed it for a short distance but it was clearly a fritillary. Without getting a closer look it was impossible to know which one.

I will post more photographs from today over the next few days. 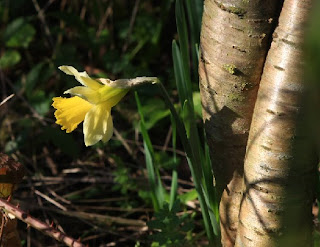 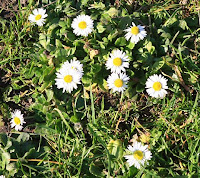 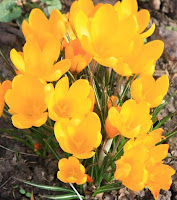