Thursday afternoon in the sun 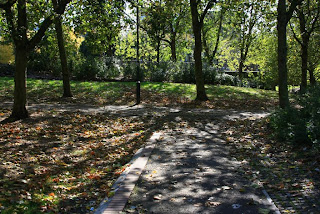 Today was beautiful. In spite of the fact that it was wonderfully sunny the twin impacts of a sore throat and a temperature left me feeling distinctly chilly. I took a couple of cold cure tablets and ventured forth in the early afternoon, with camera and paperwork in tow, but forgetting both watch and mobile phone, which made me feel somewhat adrift from the real world.
The speed with which the season is changing from one state to another is truly remarkable. For the first time this year I was shuffling leaves with my trainers, rustling them as I walked. Quite why the act of rustling fallen leaves is so satisfying I have no idea, but it is a great feeling. Freshly fallen bright colours were lying over the dimming pale browns of earlier leaf falls. In the trees there is much more orange to accompany the yellows, but the bright greens still remain. It may not be New England in the Fall but it is very, very pretty. 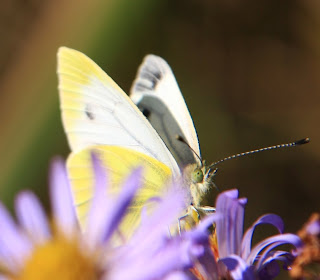 There was almost no-one there today, even though it was around lunchtime and a day made for walking. A lady sat on a bench on the green, a girl was pushing a pram slowly along the woodland paths, and a young couple were having a muted argument either side of the gate at Globe Pond. A man was wandering around Stave Hill pond. That was about it for human activity.

The Downtown Pond area has changed very little. I was hoping to see some recovery in the water levels, but if anything they have fallen again. There was no waterfowl in evidence and the heron was nowhere to be seen. The Yellow Flag seed pods have burst and released their seeds. The colours were very fine and the bullrushes are always a velvety pleasure to see. There was a single Small White butterfly on a Blue Zephyr flower.

There was more to see at Globe Pond. The mallards were out in force, many churning up the water in noisy enjoyment, some sleeping in the sun. Coots and moorhens flitted between the pontoons. I was saddened to see that items had been thrown into the pond - a life belt, what looked like a vacuum cleaner and a bin-liner full of garden waste.

Moving on to the windmill the story was the same as elsewhere. The leaves are changing colour, and look lovely. The berries are still bright, but there seem to be less of them. There was only a 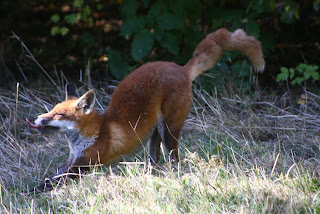 dim hum of crickets and there was no insect life to be seen. I was surprised because I thought that the sun would being out the end of season die-hards.

The highlight of the visit was a marvellous red fox, lying perfectly still in a clearing to the right of the path that leads from the windmill to the Stave Hill pond. For one awful moment I thought that he was dead, but as I stood and took photos he lifted his gorgeous head and stared straight at me, completely unperturbed by my presence. I stood, watched and snapped for several minutes and he simply lay where he was and watched me, with his eyes half closed. Eventually he got to his feet, stretched deliciously, gave a wide yawn displaying a fine set of teeth, and departed at a leisurely stroll into the woodland behind. It was a privilege to share the moment. 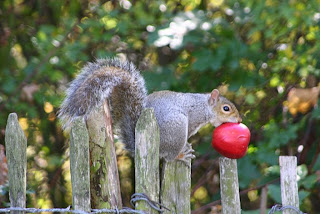 There was nothing much happening at Stave Hill pond so I walked up the path and circled the hill. Out of the corner of my eye I saw a squirrel on the fence. When I turned to look at him he froze in his tracks and I was amused to see a vast red apple between his teeth. One wonders where it came from.

I should probably have completed my circuit and gone home via the butterfly sanctuary, but completing the paperwork in my bag next to the Thames at the Old Salt Quay (which I still think of as Spice Island) seemed to be a far more attractive option so I departed for there. I am sure that the Peroni improved my editing skills, and it most certainly took the edge of my cold. 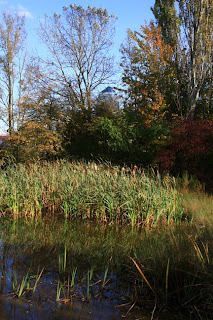 Walking home through the butterfly sanctuary, I saw that the children have been busy again making little craft items that currently adorn the trees - brightly coloured fish with scales made of broken CD-Roms. In the sanctuary itself the strings and information notices have been taken down and the grass has begun to recover from its mowing. There was no life to be seen, though - just one solitary wasp. Les Butler would probably have found some more wildlife by getting down to the level of the grass itself, but as I was dressed from head to foot in white I thought better of it.

I returned via the Downtown Pond again, and was rewarded with the sight of a band of Great Tits and a Goldfinch, all chattering and singing in the sun and breeze. They were all moving too quickly to photograph, but they were very pretty to watch as they darted between the trees.

Les Butler has had rather better luck on the insect front. Although as I mentioned above, Les works rather harder at finding them. He has updated his blog again with some really lovely photographs. I particularly like the parasitic Ichneumon Wasp.