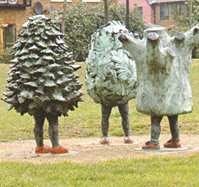 I am jumping through hoops in my other life at the moment and have had very little time to go over the road and take photographs. Sadly I've either been buried in my office at home or stuck in town with the joys of the dour architectural block otherwise known as the Institute of Archaeology in London. Not one of the world's best pieces of urban design. Fortunately the place is full of fabulous books and rather good people.

In spite of the inability to make it over to the RDW or Stave Hill I am still receiving news from the outside world, thanks to the wonderful world of email. You can see the main subjects of discussion on the Friends of Russia Dock Woodland website.

One of the sadder pieces of news is that the 1996 sculpture by sculptress Laura Ford has been removed, presumably stolen for the financial value of its metal. People never cease to dissapoint. The sculpture consisted of three botanically-themed constructions made of bronze. They appear to have been designed for another location at the Cass Sculpture Foundation. They were put here by the L.D.D.C., which was committed to adding art to its new developments. Perhaps they were moved to Surrey Quays when the Surrey Water area was under development, or perhaps copies of the originals were installed. I have been unable to discover which was the case.

Here's what the Cass Sculpture Foundation website says about the artist and the sculptures:


Laura Ford has been thinking about how sculpture operates within a landscape and wanted to make something that would become part of it, but which on closer observation would be rather strange in that environment. She started with the Stump Girl, which takes the form of a regular tree stump animated by a pair of little girls' legs. The later Conifer Girl and Bush Girl which complete this unruly trilogy, add to the conundrum. When brought together they give rise to questions of identity, intent, fear and humour. Are these depictions of real trees? Are they watching? Are they malevolent? They provoke parental concern, but remain beyond our reach. The sculptures are made in a traditional material, bronze, with all its authority and associations with important monuments. It is employed here to suggest a different scenario. The artist has used the convention of perfect outdoor sculpture for a subversive subject-matter.

The Conifer and Bush are quieter than their Stump counterpart, but possibly more malevolent. Simultaneously they have the innocent joy of girls playing in the wood and the bleakness of children gone missing. In a gallery setting (they were first shown at Spacex in Exeter in an exhibition for which they were especially cast by Sculpture at Goodwood) they are hopelessly attempting to camouflage themselves, like children hiding their

heads and thinking they cannot be seen. A landscape setting such as this renders their fantasy almost a reality. Nature Girls are uneasy, but comical. Laura Ford shares with Camille Paglia a view of nature which, like sexuality, is at times romanticised but is brutal and cruel. Nature Girls evolved from a series of works devoted to the tyranny and contradictions manifest in children. All of these girls are egotistical, attention-seeking and aggressive as well as possessing the opposite qualities.


All that remains of the sculptures are the feet, stumps above the little red shoes.

Whether you love these and other local sculptures or hate them is not the point here. They are part of our local heritage and, like the rest of our heritage, should be preserved from theft and vandalism. The point is that something that belonged to the community as a whole has been stolen for the self-centred personal gain of those who took them. I can't find better words to express my own frustration that those of local resident Gary Williams who said today that "The idea that such a wonderful public work of art can simply be taken for private gain is beyond terrible".

Hopefully I'll get the chance to go up to Surrey Water in the next couple of days and get a photograph of the sad remains.

As Gary Williams also said, it would be a truly terrible shame if the defacement and theft of public art works in our area were to overshadow or even prevent plans for future works, like the Brunel statue that has been planned.