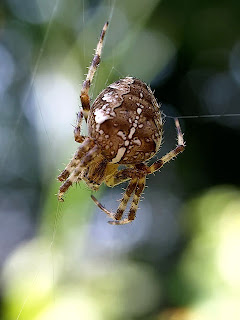 Les Butler may have cured me of Stave Hill for life. I am not scared of spiders, I really am not. I just prefer to keep a safe distance between their space and my space. A very British sentiment. The spider I was posting about last week turns out to be nothing more exotic or alarming than a female Common Garden spider (Araneaus diadematus). The reason that I was unable to identify it is that their markings vary considerably from individual to individual, and mine looked somewhat different from the one in my book. Thanks very much to Les for the identification, but not for telling me that he ended up with a huge one on his shoulder, touching his neck, at Stave Hill last Saturday. It quite put me off my morning tea.

The photograph on this post is one of Les's. It is another female of the same species. They are really lovely, if you can look at them objectively.

Les says that although you can find them in the centre of their orb webs, which can be vast, they often lurk to one edge of the web, beneath a leaf.

My book has a stomach turning description of how spiders, all carnivorous creatures, cope with their prey. I can't improve on the wording, so here it is in all its gory glory: "The spider's weopnary consists of a carapace. The prey is usually stabbed just behind the head, where the nerves are concentrated, and is quickly paralysed by the venom. It may then be wrapped in silk before being drained of its body fluids. Digestive juices are pumped in to the victim to liquefy the tissues, for the spider can ingest only liquid food." (Michael Chinery, Insects of Britain and Western Europe, revised 2007 edition, Domino Guides, p.302). Fortunately, the paragraph goes on to say that very few British species can pierce human skin and even then the effects of the venom are minimal.