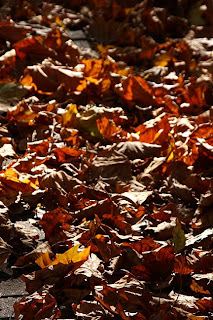 This afternoon was very cold but very beautiful. A sharp breeze kept the few clouds in motion and ensured that no-one in the parks stayed still for very long, but the sun touched everything, sparkling on the water, filtering through leaves, and offering some soft warmth against the chill. In spite of the sunshine I was taking no risks, and was firmly wrapped in a ski jacket, which proved to be a wise decision.
After a week the main story in the Russia Dock Woodland is the relocation of leaves from tree to ground. Walking into the Woodland from Onega Gate in an ancient pair of trainers I was almost skating over the thick surface of shiny orange-brown leaves. The colours are absolutely stunning wherever you look and only a few trees are completely denuded of foliage. Nevertheless, so much leaf-fall has taken place that it is now possible to see far more of Canary Wharf through the trees than before. Autumn is singing its annual swan-song.

There was almost no insect life to see. Two wasps, one large -white butterfly and some damselflies were the sum total of my observations. 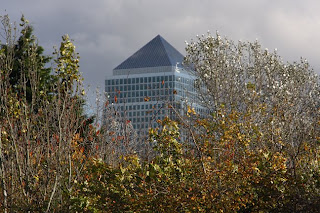 By contrast, the bird life was much more vibrant than usual. The blackbirds were having a marvellous time turning over leaves and creating almost as much noise as the pigeons, which were stampeding through the fallen foliage making a real din. Near the windmill I saw a small group of long-tailed tits (Aegithalos caudatus), darting in and out of the trees, landing for seconds at at time on branches before taking off again. They were absolutely enchanting to watch, but quite impossible to photograph. There were lots of magpies around, their shrill calls very distinctive. In the Russia Dock Woodland there was the unmistakeable sound of a woodpecker and I tracked it down just as it took to flight. It was an enormous green woodpecker, Picus viridis. A solitary female chaffinch (Fringilla coelebs) sat on a branch and looked down at me, familiar from my parents' garden but the first I have ever seen in the RDW. Like everything else today, it took off before I could photograph it. 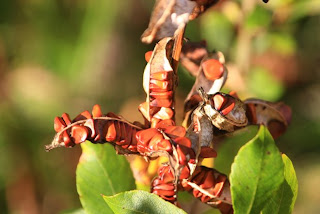 Globe Pond was packed with mallards and several moorhens, as well as a single heron. Nothing much was happening at either Stave Hill or the Downtown ponds. The Yellow Flag pods at the Downtown ponds have split completely into their three segments and the large copper-coloured seeds were littered all over the stone blocks which edge the pond.

There were squirrels everywhere, making a vast din in the leaves, racing up and down tree trunks and generally making more noise than the pigeons and blackbirds put together. 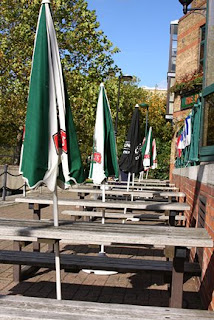 Greenland Dock, where I paused for a quick beer outdoors at the Moby, was very quiet. A few seagulls and coots were the only birds to see, apart from one very scrawny Great Crested Grebe which I assume was just growing into its plumage. The only sound, other than the sharp calling of the coots, was the noise generated by kids in canoes outside the watersports centre on the other side of the dock. I was one of a small handful of people who were brave or mad enough to sit outside in the cold sunshine. But as icy as it was, it was still a lovely pause before returning to work on a truly ghastly paper on coping strategies adopted in marginal areas by early Egyptian economies. Sigh. The things we let ourselves in for.

I very much love Egypt and the desert heat but I wouldn't willingly take up a life of ever-lasting sunshine as a substitute for a sometimes maddeningly seasonal and tempermental climate which includes days like these, all colour and sensation, changing daily, a real joy.