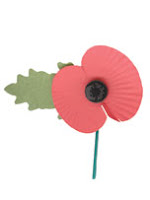 I was saddened by this story from Southwark News. Money from the sale of poppies goes to raises fund for the provision of financial, social and emotional support to ex-servicemen and their families.

RESIDENTS OF Southwark are turning their back on the Royal British Legion's poppy appeal, despite previously being one of the strongest areas for collections, it is claimed.

The iconic paper poppy goes on sale this weekend and has been used by the British Legion for decades to raise funds to provide financial, social and emotional support to ex-serviceman and their families.

But the numbers of sellers in the borough, one of London’s worst hit in the Second World War, are rapidly falling away.

Southwark branch distributor, Beatie Hall, told the 'News' that she was banging her head against a brick wall: "Only two out of the 40 new customers that I wrote to have agreed to take poppies. We have got the same old 50 or so regular places who do it every year, but we’re lacking interest from new people."With a record breaking £30 million being raised by the national appeal last year, Hall is convinced that the buyers are definitely out there - just without the sellers.

She said: "There is not a lack of people wanting to buy poppies. Last year at Waterloo, there were queues of people waiting to get theirs. There are just not enough people selling them.

"What we are lacking is the man on the street. People seem to be turning their back on the Poppy Appeal, which is such a shame. If it wasn't for our regular collectors, then we just wouldn't get them sold."

See the above page for the full story.
Posted by Andie at 13:12