In the process of trying to draw a sketch map of the RDW and Stave Hill I found myself somewhat unexpectedly at Glob Pond. There, playing at the edge of the pond near to the path were a family of coots. The mother was feeding the chicks on a variety of unappetizing items, and the chicks were following their parents into and out of the water. They all ignored my presence completely and I was able to sit on the grass only a couple of feet away from them to watch their activities for a good half hour.
Later the same day on Greenland Dock I saw an adolescent grebe squabbling with a coot, who was in charge of her chick, apparently over rights to a particularly desirable corner. The untidy little grebe lost the fight, but the feathers really flew for a few moments. 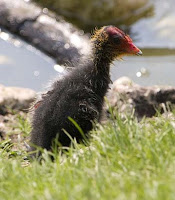 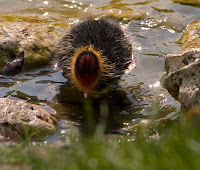