Coots and Mallards on Greenland Dock 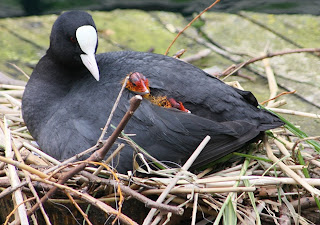 On my way to deposit some post in the letter box on Finland Street yesterday I took some bread and seed for three families who have made their homes on Greenland Dock. The two Coot families had chicks that were tiny, but the ducklings were growing fast, and were confident.

I have never seen Coot chicks resting in the feathers of their parent, but as I watched two little red and yellow heads emerged from beneath a black wing.

Coots are ruthless collectors of plastic. One of the nesting pontoons on the dock is a mixture of natural greenery and plastic bags and bottles, all still being collected and arranged by an efficient parent.

As far as I could tell one Coot family had five chicks, and there were ten Mallard chicks accompanied by their mother. The other Coot family were so well concealed in the vegetation of their pontoon that it was impossible to count.

Passing the Ship York I noticed that it now has a set of three recycling bins next to it, which is useful information. For a short period there were bins near Finland Street, but these vanished suddenly and I assumed that they had been moved due to residents complaining about the noise, which from the bottles alone was excessive. It is nice to know where they went!

I went into the RDW from behind the Downtown health centre, a route which I've never taken before. That whole area, which includes some unused land which is growing wild (see picture, right), has been the subject of building planning applications which have been going on for years now, which continue to include some hair raisingly ambitious proposals. If the proposals were accepted Barratts would create a development which would reach right up to the edges of the pond at the Redriff bridge.

At the Redriff bridge in the RDW I spotted the heron standing on the same perch that he had been sitting on on Thursday, overlooking the water. Trying to get a better shot of him I accidentally disturbed a fox who moved like quicksilver on hearing my far from subtle approach.

I later ran into Rebeka from TRUE who was wheeling a bicycle along the path from Stave Hill - it had been abandoned in a hedge and she was taking it back to safety before reporting it to the police. It looks very much as though it was stolen and then abandoned when the brake cable snapped. Rebeka's tasks are certainly varied!

Here are some of the chicks on Greenland Dock. As usual you can click on the small image to see the full sized photograph if required. 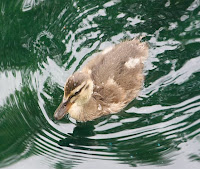