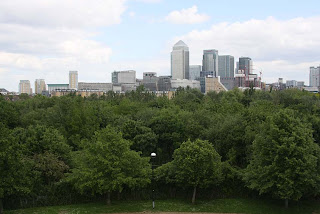 I took a stroll to the top of Stave Hill yesterday afternoon, taking advantage of an intermittently sunny spell in an otherwise cloudy and overall chilly day, well wrapped up against the cold in jeans and a warm jacket. Even though it was Sunday yesterday the park was quite empty and felt like a week day - a real contrast to last Sunday when the sun was so glorious that I was wandering around in shorts and a t-shirt in a park full of people of all ages enjoying themselves.
I was on Stave Hill to take a set of shots to make up a panorama, with some idea of stitching them together in Photoshop, something I've never tried before (and still haven't attempted). As I stood there admiring the striking view across the myriad of woodland greens towards Canary Wharf a young woman appeared leading a donkey, 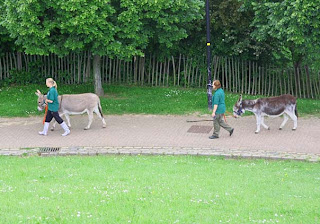 closely followed by another girl with a second donkey. They proceeded from the Stave Hill Park entrance and walked around the hill, vanishing off down the opposite track. I assume that the four of them came from the Surrey Dock Farm, but quite what they were doing the in the park I can't imagine - I wish that I had had the sense to go and ask! But whatever they were doing they were a lovely sight. Donkeys are immediately engaging.

A piece of donkey trivia. I do a lot of work researching the prehistory of Egypt (a bit esoteric but very satisfying). One of many interesting questions about this period centres on when different animals were domesticated and how they were then used. It has been known for a long time that donkeys were domesticated in northern Africa, but the evidence has been a bit indeterminate about when and where precisely this occurred. Now a recent study has suggested that the donkey was probably domesticated in Egypt, at around 5000 years ago. Donkey remains were found buried in the tomb of an early king who predates the Pharaonic

period, at a site called Abydos, and some of the skeletons were found to be morphologically transitional between the wild ass and the modern donkey. So those two little chaps strolling through Stave Hill yesterday were one of the end-products of a process that has taken at least 5000 years and covered many thousands of miles. Quite a thought. If donkey domestication is up your street, have a look at these summaries on the Science Daily and Fox News websites (photograph copyright PNAS/National Academy of Sciences).

Hello Mike
I had a look at all your photos, including the panoramas, and they are great. I particularly loved the shot of the grebe with all her chicks on her back, but overall it is an absolutely super collection and really shows the variety of wildlife that exists around here.
Thanks very much - I enjoyed them.

I might brave the panoramas a bit later today - it was a very gloomy day when I took them, but the plan is just to get the knack of it before trying to produce masterpieces :-)

The best place on the peninsula for taking panoramas is actually not the top of Stave Hill but the riverfront at Cuckolds Point, just upstream from the Hilton, where the Docklands buildings are much closer.