Between the wind, the rain and my current visit to Wales I've failed to catch up with the park in the last week and a bit, but there has been some good news.

There are several families of baby hedgehogs in Stave Hill Ecological Park, coot and Great Crested Grebe chicks on the dock and tit chicks in the bird boxes in the Russia Dock Woodland, all very noisy!

The crushed and leaking water pipes have been replaced in the Woodland and the results in the Downtown Ponds have been immediately visible, saving them from drying up completely and restoring them to their former glory.

The new bridge sculpture is in place over the bridge beyond Globe Pond, and looks great. It was vandalized within days of being officially launched but blacksmith Kevin Boys, based at the Surrey Docks Farm, was on hand almost immediately to repair it and it has been left untouched ever since.

Finally the application for Green Flag Award status for the Woodland seems to have gone very well indeed! We won't hear the results until late June or early July, but the response from the judges who came to inspect the park last week was very positive. There are lots of events coming up in Stave Hill Ecological Park, details of which you can find in the calendar on the Recent News page of the Friends of Russia Dock Woodland website. 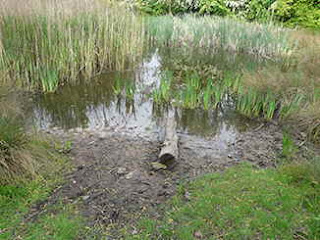 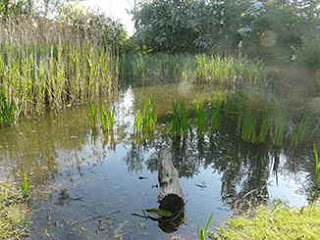 (Photos by Steve Cornish, Chairman of the Friends of Russia Dock Woodland)