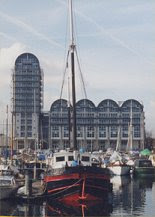 This item actually dates back a week ago, to the 27th April 2009 but I've only just noticed it. Those who live on residential moorings on the British Waterways managed canal system have always been charged a residential mooring fee, which covers basic services and reflects the higher level of usage that residential users represent on the waterways. I lived on a narrow boad on a residential mooring on the Grand Union canal in the late 80s and had no issue with paying this fee, which was a lot more expensive than that being asked of the dock dwellers, but maybe I'm missing a point somewhere.

ANGRY barge dwellers are threatening to “stand up” to a council that introduced a fee to live on the river.

More than 130 people live on the barges in a community at South and Greenland docks, Rotherhithe.

They have rejected Southwark council demands for a £650 licence to stay living on water.

If they refuse to pay the licence fee, they could be forced to leave the docks within two weeks.

Kevin Bridgey, owner of the Vertouwen barge, has been living at his dockside mooring for more than 10 years.

He claimed the council was using “bully-boy” tactics to make people pay the charges.

He said that last Friday he got a phone call asking him to sign-on to the new arrangement for residency, but refused to agree to the terms.

Mr Bridgey said: “We are trying to be recognised as a community.

“It’s not about the council tax at all.

"If they turned around to us and said, ‘pay council tax’ that would be another matter.

“They are using bully-boy tactics to get money and we have to stand up to it.

"We have got less rights than the gypsy community here.”

Mr Bridgey claimed boat owners had already been hit with a 25 per cent hike on mooring fees by the authority, bringing the total cost of mooring a barge to £7,000 a year.

A council spokeswoman said the authority was dedicated to protecting the boating community.

She said: “Like every other marina in the country they must abide by the terms and conditions or find another marina.

“Those boat owners who choose to live permanently on their boat will be using the borough’s services – school, rubbish collections, roads, libraries, and so on.

“It is only fair to every other council tax payer that boat owners contribute to those costs.”

North Southwark and Bermondsey MP Simon Hughes has written to Southwark’s director of environment and housing, Gill Davies, asking that she attend a meeting with berth holders to resolve the situation.

In the letter Mr Hughes said forcing residents to leave the docks if they do not agree to council terms was “completely unhelpful and insensitive”.