Once there were swarms of butterflies in our skies 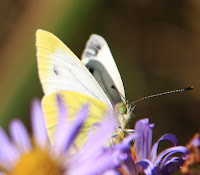 The Guardian, UK
(By Patrick Barkham, author of the forthcoming A Butterfly Year)

There was recently a fascinating article in The Guardian (27/04/09) about the challenges facing the butterfly in modern times.

As well as peticides and climate change other man made problems have lead to dwindling numbers. In some cases only recently have the lifecycles of certain species been fully understood and, as some of these can be remarkably complex, this has prevented butterfly conservationists from being able to prevent or at least slow down the decline of some species. This is a truly fascinating article about butterflies, what different species require in order to survive, and how changes in the landscape are inevitably causing them difficulties. It is also very well written.

Here's a short extract, but do visit the above page for the full story:

"Whichever way you look at it, it's linked back to the climate," says Tom Brereton, head of butterfly monitoring at Butterfly Conservation. Climate change, he says, is a particular problem for our butterflies because our countryside is so fragmented. Decades of ploughing up grassland and ripping out hedgerows means that more than half our butterfly species are now confined to small islands of land. When the climate makes the current sites unsuitable, butterflies will no longer be able to fly elsewhere and find new sites. "If you had an intact countryside, butterflies should be going through the roof, but the species can't move through the countryside like they once would have done," says Brereton. "Habitats are too fragmented. There are vacant suitable habitats in parts of the countryside but the butterflies won't necessarily find them."

Our largest and most charismatic native butterfly, the swallowtail, was once found across the fens of East Anglia and beyond until the draining of these wetlands for arable agriculture caused its extinction. It is now confined to the Norfolk Broads. When global warming causes the Broads to be inundated with sea water - widely expected within 100 years - the swallowtail will die unless it is relocated by humans to suitable inland sites. These new sites will have to be meticulously created to cultivate a single, rather neurotic wetland plant used by this notoriously picky species.

Conservationists playing God like this has already happened. The last species to become extinct in Britain was the large blue in 1979. Despite heroic scientific endeavour, the full complexity of this butterfly's weird lifecycle was not understood until it was too late. When tiny, the large blue caterpillar throws itself on to the ground and secretes a tantalising scent which tricks ants into carefully taking it into their underground nests, whereupon the nasty caterpillar devours ant grubs until it is fully grown. Its dependence on ants was known but not that it relied on a very particular species, which in turn needed a very specific kind of rough grassland to survive. So, in the 1980s, conservationists brought stock from Sweden and successfully re-established the butterfly on a small field on the edge of Dartmoor. Dad and I were ticked off by a warden when we found this secret meadow, still known only as Site X. The large blue has since been successfully reintroduced into other areas.

With this kind of ingenuity, could we turn the whole country into a giant butterfly farm? Could we save every species by reintroducing them to tailor-made nature reserves or boosting populations with specimens from abroad? "We might do it for a few species, but it's not the basis for a conservation strategy," says Warren. "What about all the other insects? We want to get the habitats right and butterflies will tell us if we are getting it right, and then we'll be getting it right for biodiversity as a whole."

There is also a section at the end of the article which offers four steps for the public to take in order to help save Britain's butterflies. Three of these are sound and practical, but the fourth ("buy produce from farmers who manage their land to support wildlife)" might be slightly more difficult to achieve in this part of London.