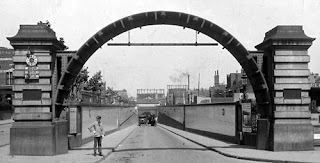 I cannot believe that yesterday was the centenary of the Rotherhithe Tunnel and I've only just found out about it quite by accident. I will be astonished if there was not some sort of commemorative event that I managed to miss, for which I will be kicking myself.

I am going to post about the construction in detail at some point in my series of heritage posts. But here's a brief summary of its background to mark the occasion.

First off, the Rotherhithe Tunnel should not be confused with the earlier Thames Tunnel, the construction of which was achieved eventually by the remarkable engineering Brunels, father and son (of which and whom more on a later post).

The Rotherhithe tunnel was the project of engineer Maurice Fitzmaurice and it was opened on the 12th June 1908 by HRH the Prince of Wales. It was originally designed for horse-drawn carriages, which goes a long way to explaining why the designers had no consideration for the fact that for 10 years between 1996 and 2006 I would have heart failure every time I took my beloved and somewhat enormous classic Mercedes round that dog-leg bend! The tendency of Ford Transit van drivers to treat it like a personal Grand Prix circuit was truly terrifying (I now drive a Volvo and simply don't care).

When the Rotherhithe Tunnel was first opened it used to handle an estimated 2600 carriages daily, but according to Transport for London it now takes 34,000 vehicles on a daily basis to and from Rotherhithe and Tower Hamlets (and beyond). It is 4,860 feet long, of which 1500 feet are beneath the Thames, and it has a 27 foot diameter.

The above photo shows it in 1909. Today, it is absolute bedlam!

The Rotherhithe and Bermondsey Local History Group has posted a very good centenary history of the Rotherhithe Tunnel on their website, written by Dr Amanda Squires and accompanied by some super photographs. I particularly like the photo of the men excavating the tunnel.