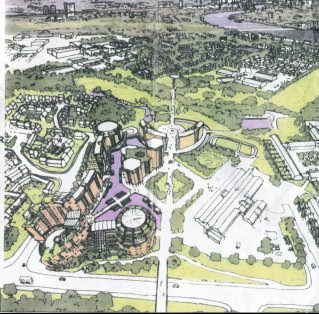 Thanks to Steve Cornish for the news that on the 24th June 2008 Southwark Council’s Executive Committee decided to grant Barratt Homes a 'new contract' for the sale of the Downtown site. The Downtown Defence Campaign put its case to the executive but they decided to go with the Planning Department recommendation to delegate the power of sale to an un-elected council officer. One executive member stated “How do you think we will get the pot holes in our roads repaired if we don’t get the money in capital receipts from this type of development?”.

Barratt Homes will now put in their revised application some time in September 2008. If this gets the nod then the 300 + trees on the downtown site will be cut down before Christmas 2008. Its now down to you, the local public, to make your voices heard loud and clear.

We will be holding our D.D.C AGM very shortly (before September) to decide on on our future plans. All is not lost, Barratts still have to address the three grounds for refusal received after the last planning failure.

Please see the Deputation presented by Steve Cornish on behalf of the Downtown Defence Campaign on its own page on the Friends of Russia Dock Woodland website. If you want to know more about the Downtown Defence Campaign have a look at the Friends website, which is one of the best places to find information about this issue, and will continue to be updated with the latest news on the subject.