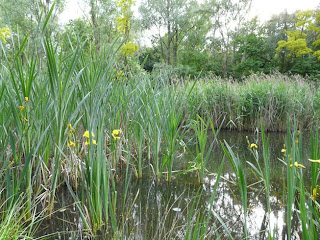 I went over to take some water out of the Downland Pond next to the Redriff bridge to have a look at under the microscope, just out of curiosity to see what's living down there.

Whilst I was there I took a couple of photographs with a new camera that I am trying to get my head around. I have been using Canon cameras for so long that it's like learning a new language to pick up a camera with a different operating system.

The most conspicuous feature of all the Russia Dock Woodland ponds is the prevalence of the yellow water iris. Its usual common name is Yellow Flag and its technical name is Iris pseudacorus. I suppose that it would be impolite to label it a weed, but in spite of its beauty it does share characteristics with wild plants which spread to the detriment of other species. It can quickly become invasive and has two methods of spreading itself – in the immediate locality by means of its rhizomes and over larger areas of water by seed. It is almost impossible to eradicate it entirely, and for this reason some places have chosen not to allow it to get a foothold it in the first place. But in spite of its invasive personality it appears to be socially acceptable in the lake at ’s Royal Botanic Gardens, which I visited last Sunday, so we are in good company in the Russia Dock Woodland!

This particular piece of water, where Steve took his wonderful photos of the kingfisher, which would be edged by the planned Barratt's development were their plans to be accepted. 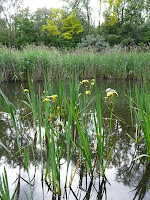 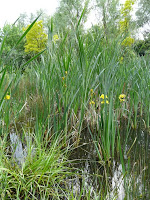 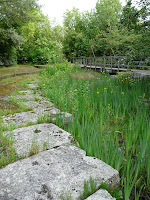 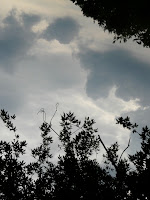