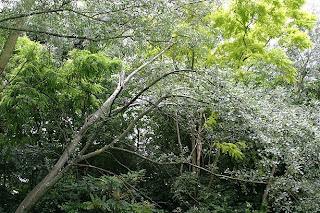 I'm back after a superb week in Wales and the state of my Inbox is horrendous - 391 emails which claim not to be Junk mail to just one of my accounts. Sigh. It has been raining on and off all day today but I risked the showers to go and inspect the Russia Dock Woodland - and duly ended up being fairly well soaked. It was worth it, though.
The main thing that one notices about both Stave Hill Ecological Park and the RDW are that the plants are so very green, the little wild flowers are spreading far and wide, the Yellow Flag irises have gone over, and there is an air of expectation about the entire area. The shrub roses are going over but the bramble flowers are in full bloom. My orange pom-pom bush, actually a Buddleia globosa, is going over slowly - but is still very pretty.
The bees and butterflies were safely hidden away from the rain but the birds were out in full force. The usual crowd of pigeons who always centre themeselves on the St John's bridge were up in the trees, but there were magpies, the blackbirds were cheerfully turning over leaves and there was a thrush. I have never seen a thrush in RDW before, and this one was quite lovely, with a fabulous singing voice. I've diligently checked my bird identification books but I cannot work out which of the thrush family this one belongs to.
I walked up along Greenland Dock to buy a French stick from Elgar Street. The coot family on the pontoon under the foot bridge were loud and demanding, leggy and improbable - I cannot believe how much they have grown in a week! The plastic bags still form an integral part of their home, but they don't seem to have harmed the birds so far. One of the parents was enjoying a fabulous bath. Four great crested grebes floated sleepily in the dock, idly letting the water move them.
I'll post pictures from today over the next few days. 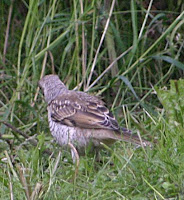 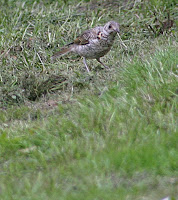 I think that would be a juvenile mistle thrush -- song thrushes tend to have spots shaped more like arrowheads. I've seen both species in RDW/SHEP this year, but mistle more recently and more commonly than song.

Thanks Mike. The photographs are somewhat fuzzy, which makes life a bit difficult (my camera is away for repair so I'm using an old spare which I haven't quite remembered how to use). The arrangement of the wing feathers looks very distinctive but I don't have enough references to judge. It certainly behaved like a juvenile - wary but curious with nowhere near enough fear. A pleasure, anyway.