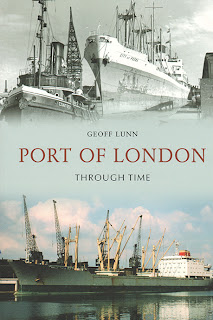 There are a lot of books of this sort about London.  Their strength lies in the photographs, which juxtaposition past and present, with only enough text to explain what the reader is looking at on the page. All books of this genre are interesting, because photographs of past heritage never cease to be fascinating.  This one concerns itself exclusively with the maritime past of the Thames.

A thriving port for many centuries, by the 1930s it was the world's largest port, and was only undermined as a thriving destination for ships and cargo by the 1950s invention of the container, specialized container ships and roll-on-roll-off (ro-ro) technology.  This book covers the stretch of the Thames that formed the Port of London, from Gravesend to the Upper Pool, just the other side of Tower Bridge.

Chapters are as follows:
Introduction
Chapter 1: Gravesend to Gallions
Chapter 2: Royal Docks to Rotherhithe
Chapter 3: Lower Pool to London Bridge
(There is no index)

Although the Port of London existed for many centuries, the comparisons between past and present are doing via photography, so apart from one c.1850 painting, the earliest "before" images are sepia photographs dating from the early 1900s but majority are from the 50s and 60s.  The "after" photographs are all modern, most taken by the author and his daughter.  The photograph on the front page gives a very good impression of what the rest of the book is like.  Photographs from the past are set against photos from the present, but are not always directly comparable (as in the sample page of South Dock, scanned from the book and shown on the left). 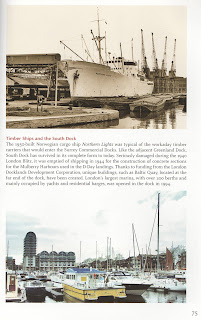 The value of this sort of book lies mainly in the quality of the original photographs, and although these are excellent, the majority of the old photos are of ships and few show the surrounding landscape or the old docks. The ship photographs are really lovely, but there are less informative than those of former wharves and docks.  These are certainly available because they appear in other books about docklands and local history, so it is surprising that so few were selected for this book.

Each chapter has a page of introductory text.  On the following pages, the text that accompanies the photographs consists of around a paragraph on each page. Although limited, it provides historical information about architectural features, advances in shipping technology and changes in river usage and river services.  There are a small number of maps dotted throughout the book, most of which show what the docks looked like in the past, which is useful now that so many of the Thames docks have been filled in and are no longer shown on modern maps.

For those interested specifically in Rotherhithe, there are very few photographs of the past docks or Thames frontages, and quite a few of the already familiar present. There is also a fundamental error on page 71, where a photograph that claims to be the entrance to the Surrey Commercial Docks is actually a photograph of Dundee Wharf and entrance inlet to the former Limekiln Dock on the north bank of the river.  One paragraph, over a photograph of Greenland Dock, says that "the locals have fun speeding across the dock waters" (with a picture of the watersports centre's speedboat, used mainly for monitoring sailing classes), which makes it sound as though we all have speedboats moored outside our houses, when in fact we would probably be arrested if we tried anything of the sort -  a shame though, I wouldn't mind giving it a whirl!  On the other hand, there are super photographs of ships that used to moor in Greenland Dock, including the Cunard's Ausonia and the Canadian Pacific Beaverfir.

There's no information provided about the author, apart from a passing comment that he wrote a column for the Port of London Authority's in-house magazine.